“Ballard to get broadband,” says Mayor McGinn – My Ballard Skip to main content 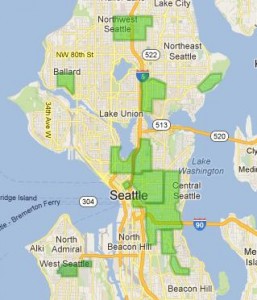 Last December, City of Seattle and Gigabit Squared signed a letter of intent to supply high speed internet to 12 demonstration neighborhoods in Seattle. Ballard was not included in the initial 12, however, Mayor McGinn announced on Tuesday a project increase to include 14 neighborhoods. This increase will now allow locals in both our neighborhood and West Seattle to participate.

“We’re working hard to build out the next generation of our internet infrastructure and provide people with better choices” said McGinn. He confirmed that the December agreement with Gigabit Squared planned to utilize Seattle’s unused “dark fiber” to begin building fiber access to homes with service levels up to 1 gigabit per second.

The Mayor’s office reports that more than 3300 Seattle residents, 130 businesses and a large number of apartment buildings have registered their interest in using internet provided by Gigabit Squared.

Gigabit Squared has secured the funding needed to begin their detailed engineering plans. They plan to release their updated business plan by April. This plan will include the cost of laying the fiber, the subsequent price customers will pay for the service and the estimated date that the fiber can begin to be used.

“If their business plan succeeds, as we hope it will, we can leverage our remaining fiber to bring better service to the entire city,” said McGinn.

Check out the map above which shows the 14 demonstration neighborhoods shaded in green.

If you are interested in registering for the service in our area for your home or business click here.

To find out more information about the Seattle Broadband Partnership email info@gigabitseattle.com or call (206) 524-3343.

We will continue to update readers with more information on the progress of the project as plans develop.

Your link to register for Gigabit had a 404 error.