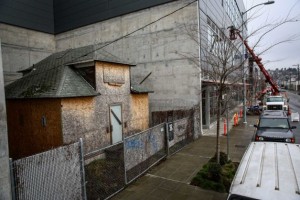 According to a Seattle PI report, the internationally recognized former home of Edith Macefield is set to go to foreclosure auction on March 13.

Macefield was pushed into the international spotlight back in 2006 when she famously refused to sell after developers offered her one million dollars.

After Macefield refused to sell, developers were forced to literally build the Ballard Blocks complex around the 108-year-old farmhouse that she had lived in since she was a child. Edith sadly passed away in 2008 and since then then her home has been left untouched and unlived in.

Upon her death in 2008 at age 86, Macefield left the home in her will to construction superintendent Barry Martin who she had become very close friends with.

Martin sold the home in 2009 to company Reach Returns, who’s owner Greg Pinneo planned to raise the height of the home to the surrounding commercial building and add a two-level space underneath in a new development that was named “Credo Square”.

The plan was to preserve Edith’s home, “keeping the outdoor appearance identical,” and elevate it to the height of surrounding commercial buildings. Inside, the home was to be remodeled and used as office space.

Underneath, Reach Returns said it would create a two-level open space that will be open to the public during regular business hours. Credo Square was set to feature plants, water features and “credo” tiles that could be purchased by locals for $250 and up.

All has not gone to plane, however, with a foreclosure notice stating that Reach Returns currently owes $185,956.04 on the property. If the company is unable to pay the amount off the property will go for auction at 10 a.m. on March 13 at the King County Administration Building (500 4th Ave)

According to the Seattle PI report, there is a possibility that the owner of Ballard Blocks complex plans to buy the property and complete the original building plan.

Photo courtesy of Seattle PI showing the property as it currently appears on February 4.