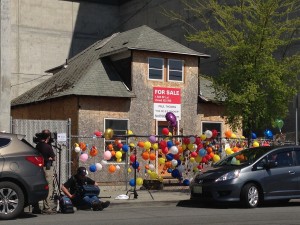 A crew from CNBC News has been broadcasting from Edith Macefield’s house this morning during the final day that public offers are being accepted to purchase the now famous landmark.

CNBC Real Estate Reporter Diana Olick and her crew have been shooting segments (see below) about the Edith Macefield story that are airing live throughout the day and the team has also put together a story for The Nightly Business Report which will air at 5:30 p.m. tonight on KCTS9.

As the My Ballard team reported on March 31st, the Ballard icon is being sold by commercial real estate broker Paul Thomas, known as the “No B.S. Broker,” who will be accepting offers until 5 p.m. this evening.

There is no asking price for the famous home, with Thomas confirming that it will go to the person with the best offer. The home is also being sold “free and clear” of the liens that deterred potential buyers from bidding on the property at the March 13 auction.

Those interested in making an offer had to include a proposal of how they would honor and memorialize Edith Macefield through their purchase.

“It’s a wonderful house. The views on three sides aren’t anything to write home about but there is a huge back yard, a surprising amount of light and an palpable sense of history,” says Thomas. 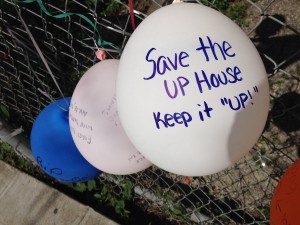 A number of Seattleites and local groups, including EAT Ballard, created petitions and online fundraising campaigns to ensure that the house remains standing as a tribute to the values which Edith Macefield stood for.

“We invite you to throw your support behind EAT Ballard‘s online petition asking the City of Seattle to delay and/or deny any permit request to demolish the house,” writes EAT Ballard on its Facebook page.

Unfortunately, a number of the Kickstarter campaigns were cancelled within the last few days as they had failed to reach even close to their fundraising goals.

The uncertain future of Edith Macefield’s home will be decided after today’s deadline when Thomas reviews all of the offers with the owner.

It is clear that whatever happens, locals are sure to have an opinion about the outcome with many showing their support to both sides of the argument.

“I hope that whom ever buys this house will keep it standing and not let it be torn down. Ballard has lost way to many of the old homes and businesses,” writes My Ballard reader Sheila.

EAT Ballard Facebook commenter Dan sees a different side to the story. “Out with this old, faux-historic and useless building,” he writes.

The My Ballard team will continue to update readers on the progress of the sale as more information is released after today’s deadline.