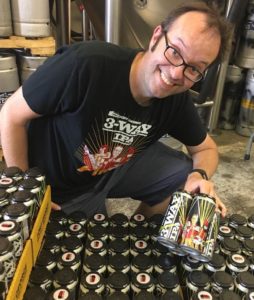 Ballard brewery Reuben’s Brews is the fastest growing brewery in the state, which means they’re going to need a bigger space.

Co-founder Adam Robbings says that while they’re currently at capacity, the process to find a new space won’t be rushed. “We don’t have any signed lease to announce – it would take a year with permits and everything to build something even when we have a signed lease, so we’re talking months if not years out,” Robbings tells My Ballard. “I walk to the brewery right now and certainly don’t want to change that – so anything new would have to be close!”

The brewery, which opened in 2012, is currently spread between four spaces, according to Brewbound: a 20-barrel production brewery with a tasting room, a warehouse, sour facility and its original 5-barrel brewery, which now serves as an R&D facility. Robbings told Brewbound that sales were up 104 percent throughout Washington for the first half of the year. The growth is evident in the numbers: Reuben’s sold about 2,700 barrels of beer in 2015, and 5,700 barrels in 2016.

“I think it’s awesome that a Ballard brewery is the fastest growing brewery in Washington,” Robbings tells My Ballard. “We’re at capacity – and want to brew more but can’t!”

No news yet on a timeframe for the expansion, but we’ll update with any new information.