After a dozen years of work, 14th Ave. finally getting a park this spring – My Ballard Skip to main content 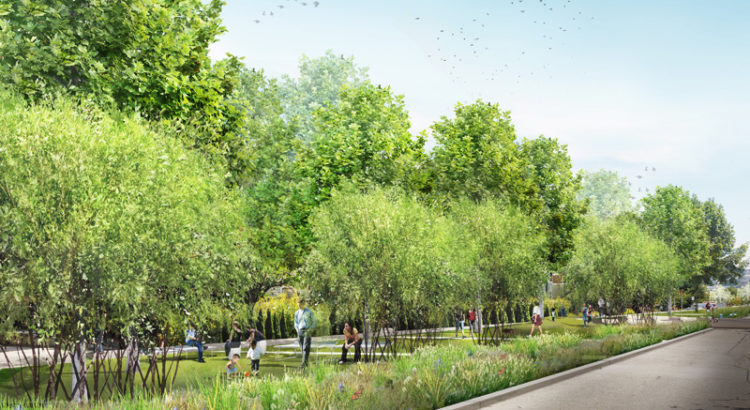 As far back as we can remember, neighbors and business owners along 14th Ave. — the stretch with the middle parking area — have dreamed of converting part of the space into a park. Not only is the street a bit of an eyesore, it’s also dangerous for pedestrians.

After 12 years of planning, cleanups and lobbying for funds — much of it led by the East Ballard Community Association (EBCA) with help from Groundswell NW — that dream is finally becoming a reality. The city said construction is officially underway on Gemenskap Park on 14th between 59th and 61st Streets — and it should be ready by this spring.

The park will feature a green space and rain gardens on the east side of 14th, incorporating much of the parking area. The roadway will no longer be split, and lanes will run side-by-side along the west side of the street. There will be new, wider sidewalks, and 60th St. will be raised to sidewalk level, creating a bit of a speed bump.

For those of us (admit it) who have used 14th Ave. as a substitute for traffic-heavy 15th Ave., the speed limit will drop from 30 MPH to 20 MPH at the park, and there will likely be 4-way stop signs, as well. Here are the details from the EBCA:

During construction, workers will be detouring traffic around 14th Ave. between 58th and 60th streets for 2-3 months. The city said the detour significantly reduces the time required for Jansen Construction to finish the project, which is slated for “late spring” of this year.

The park will not have a play structure, although the EBCA says it’s possible in the future. And the park is too small for letting your dog run free, but dogs are welcome on their leashes.

You should also know how to pronounce Gemenskap: Yuh-MEN-skawp, which is the Swedish work for community. “While there are several Ballard parks that have Norwegian names,” noted Seattle Parks when it selected the name, “this is the first with a Swedish name.” Grandma would be proud.

If you’re just getting caught up on Gemenskap Park, the EBCA has been covering the park’s evolution for years, and it offers a handy list of links here.

21 thoughts to “After a dozen years of work, 14th Ave. finally getting a park this spring”