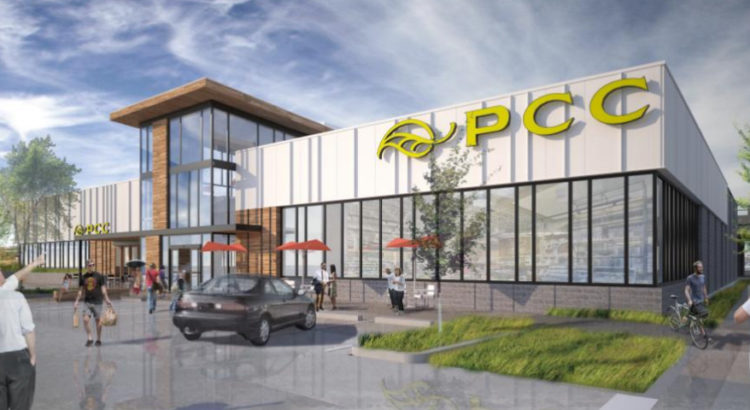 If you thought the grocery store wars in our neighborhood were already intense, PCC confirmed to My Ballard today that its opening a new store at Ballard Blocks 2 in spring of next year.

The city gave conditional approval today to plans to build the 25,000 square-foot store with 147 parking spaces — the first development in the big empty space at the base of the Ballard Bridge, right next to the Burke Gilman trail.

Among other things, PCC says it will feature “cut-to-order fruits and vegetables,” a taqueria, made-from-scratch pizza, local craft spirits, a charcuterie counter… and a rooftop deck.

For those counting, that makes a LOT of grocery stores in Ballard. There’s Traders Joe’s right next door in Ballard Blocks 1. New Seasons is building a new store three blocks away. And don’t forget about Fred Meyer, too. Then there’s also QFC, Ballard Market and Safeway. Oh, and the Amazon Fresh pickup facility is just a few blocks north of PCC on 15th.

PCC underlines it’s independent roots and Ballard’s “thriving food culture” in its decision to expand to Ballard (the Fremont store will remain and get “refreshed” late this year.)

“There is an independent spirit and love of food that is deeply rooted in Ballard,” said Cate Hardy, PCC Community Markets CEO. “You can see it firsthand in the bustling Sunday farmers market, flourishing locally owned restaurants and, of course, Seafood Fest. When the opportunity to join this community came to us, we didn’t hesitate.”

PCC also points out that it’s bringing “approximately 100 new union jobs” to Ballard. That’s a reference to the non-union New Seasons store, which has attracted some backlash from pro-labor groups as it expands in Seattle. (Full disclosure: Good Jobs Coalition, which is lobbying against Good Seasons, has been a My Ballard advertiser). 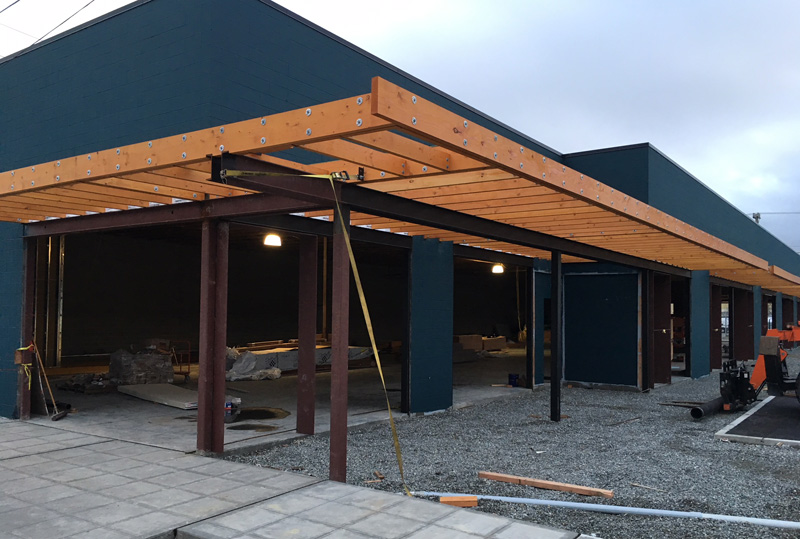 New Seasons (pictured above under construction at 907 NW Ballard Way) said it will hire locally to fill its 150 new positions, and the company donates 10% of its after-tax profits to local nonprofits.

Similarly, PCC — which is a community-owned organization — said it historically donates 15% of its after-tax net earnings to local schools and nonprofits. The store said it will “expand its food bank initiative, grocery rescue programs, local donations and school fundraising to the Ballard area.”

As you can see, this is a grocery store war with Ballard foodies in the middle of it.

By the way, PCC is just the first stage of the Ballard Blocks 2 developments. Here’s the rendering:

PCC will occupy the western side, and there are plans for an office complex with a “marine sales” company (the renderings show West Marine) and a childhood development center (it shows Bright Horizons). Renderings also show room for additional retail and office space.

Ballard Blocks 2 has been in the works for years, but the area has been plagued with a drainage problem — some have dubbed it Lake Ballard — which appears to have contributed to the delay.

We won’t be shopping there. We’ll be hoarding up cash to pay our ever-mounting property taxes. Probably oatmeal and floor sweepings for us pretty soon.

Where will the hobos sleep?

All the pissy babies can move to Tukwila.

This is slightly crazy. Ballard Market, Trader Joe, Safeway, New Seasons, PSCC, and Fred Myers all within about eight blocks. Somebody is going to take a dive. All we need is for Amazing to move in with Whole Paycheck. They are only a couple of miles away now.

I think PCC should be called Whole Paycheck. Who can afford to shop there? There are actually lots of better deals at WF and I;m no fan of them either, but their 365 label stuff is affordable. To eat well in Seattle is the domaine of the comfortably off. Poor folks cannot indulge in kale, think about it….It would take three to four bunches, they are so skimpy, to satisfy a family of four. That would be about $10 just to put a vegetable on the table!!
PCC just what Ballard doesn’t need.

For those who do t like it, …. It’s called a free market.

I look forward to that building and all the deliciousness it may offer.

Whatever they build will be better than that rat swamp.

I think the first to go will be New Seasons AKA “Whole Foods prices with 7-Eleven quality”. A newcomer chain, with zero customer recognition in the Puget Sound, owned by a giant conglomerate equity firm that is notably anti-union, in pro-union Seattle, in a neighborhood that has a sea of other grocery stores? Yeah, good luck with that.

@Kira: Did you just knock PCC as being too expensive in the same breath as praising Whole Foods as affordable? Either you aren’t as poor as you make yourself to be or you’re some Amazon troll.

I think Ballard Market will be the first to go. Has anyone else notice the empty shelves? They are constantly out of the basics.

Excellent news! Finally going to get that area cleaned up. Wesmar Chemical moved out of that space in what, 2004? Crazy that it’s been an empty lake for this long.

Ballard Market is so popular they can’t even keep the shelves stocked. Keep an eye out for an upcoming special on chirizo, it’ll go fast!

Schuster — Let’s meet up at PCC and talk about our differences.

@ballardmarketmanager
Not the best response. I have been a good customer at Ballard Market, but I will not be shopping at a store where I am not assured that I can get my basic groceries. We will have options in the very near future.

@Frank
A couple days before you plan on shopping just submit your grocery list here: http://townandcountrymarkets.com/talk-to-us/

We will make sure you have everything in stock by the time you arrive!

Very excited about this! Welcome to the neighborhood.

This is totally awesome because I have in fact forgot how to cut my own fruits and vegetables. And, since they cut them for me, it’s a perfect fit for the industrial area. Plus, is super easy for those people in South Park, Georgetown and Delridge, who don’t have a grocery store, to take the bus up here and shop.

I hope they drop the childcare (hello? no one has kids anymore) and include a pet daycare so I can leave my dog while I’m harvesting my groceries.

I’m going to miss the pond though. I always thought we could hire Joel Horn to dust off the Commons Plan, and the Monorail Plan and build a little South Lake Union around the pond right here in our own industrial waterfront. I mean, come-on, things aren’t “made” anymore, they’re ordered.

Will PCC have a special set of shopping carts specifically for the Bums?

The ongoing Boom Chikka Pop shortage at the Ballard Market has been of some concern to me too, Frank.

I agree Skinny, it is a perfect fit for the industrial/commercial area which is easily accessible from the surrounding residential area.

Pet Day Care is a great idea there too. Convenient drop-off location!

@Andy
We just got a whole truckload in this morning. They are flying off the shelves though!

What a bunch of mean-spirited commentary. I’m super excited PCC is coming to our neighborhood! And will continue to shop at what I lovingly refer to as “The BM” as well.

Also, will PCC have Trader Joe’s size parking spots, the yoga pants of parking spots? When you know you’re too fat to get into them but try and squeeze in anyway.

At the risk of sounding pollyanna-ish, I think this sounds great. I’m not personally a customer of PCC but I take no issue with them. I shop at Ballard Market, Fred Meyer, and Trader Joes, with an occasional dash to Whole Foods. I’m never in any one of them when it is not bustling. With as many new people as are moving in to Ballard, and as many new families, I suspect there is ample demand for more grocery options. And as far as the comment about not needing child care – waiting lists at day care centers are years long. They are desperately needed. All of the bickering about school boundaries is a result of far more children in Ballard/surrounds compared to years past. And before I’m accused of being something I’m not, I’m a 10 year Ballard resident/homeowner, parent of a young child in SPS and I work in nonprofit.