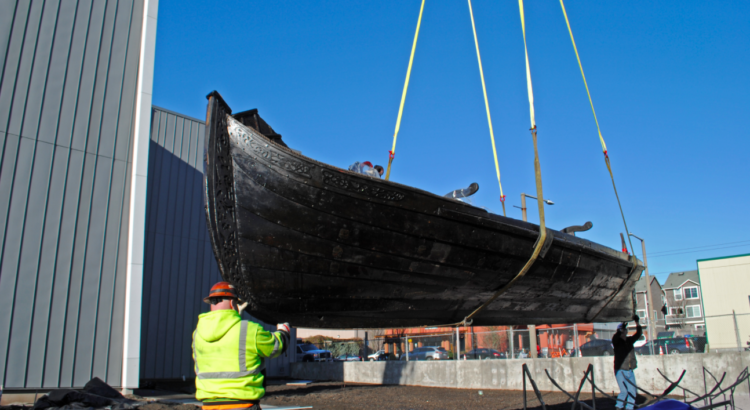 It’s not every day you see a mid-1800s fishing boat traveling down Market St.

With the help of Ballard Transfer Co., the Nordic Heritage Museum has moved the boat, the Nordic Spirit, from the old facility to its new digs on Market St., about a mile away.

The boat is now resting in a brand-new cradle in the museum’s East Garden. The Nordic Spirit was originally built as a fishing boat in northern Norway in the mid-1800s. In the 1970s, it was taken to Sweden, where an artist added the dragon head and tail (which were removed as a precaution during the move). The boat was later featured in a Volvo-Penta advertising campaign before the museum acquired it in 1980.

Ballard Transfer is also planning to move a Finnish sauna built between 1904 and 1918 by a Finnish-American family in the Finn Hill community near Bothell. Due to height restrictions, they’ll remove the roof and transport it separately.

Construction crews are making good progress at the new museum, which is on schedule to open in early May. The Nordic Museum recently made the NY Times’ list of 52 Places to Go in 2018.

(Photos courtesy of the Nordic Museum.)

Will they have gluten free vegan options?

No, but they’ll birch branches so we can slap your naked bum in the sauna with a faggot.

I remember seeing this docked at the Center for Wooden Boats a few years ago making quite a sight compared to the rest of what was on Lake Union. I hope they manage to take this out on the water every now and then!

We updated this post to clarify the sauna is moving next week, not this week.

I was part of the crew that took the Nordic Spirit out for a row in 2009 – see back page of My Ballard for photographs. Tippiest canoe I ever rowed! Big fun, and I believe it made several other voyages. Excellent restoration by Ballard’s best shipyard made it possible and generous contributions from Nordic enthusiasts.

I live a couple blocks from the old museum location. We walked right past that boat every Sunday on the way to Walt’s.