Should Ballard light rail take a bridge over Salmon Bay? Or tunnel underneath it? – My Ballard Skip to main content 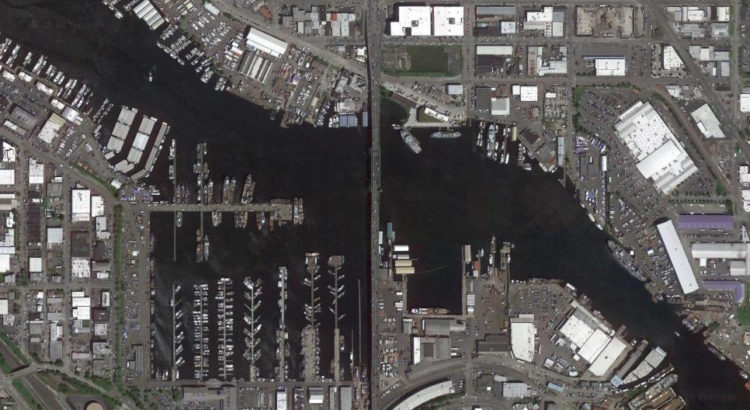 Reading some of the early feedback on the Ballard light rail project, one of the early points of contention is how the trains will cross Salmon Bay from Interbay into Ballard and back.

The early plan is to build a movable bridge that runs parallel to the Ballard Bridge, opening and closing for marine traffic. But most commenters on Sound Transit’s new online map aren’t big fans of the idea. Here’s a sampling:

“Please make this a tunnel to avoid having the train blocked by boat traffic or mechanical issues with a drawbridge. We run into problems with this *far* too often already.”

“A movable bridge that is at the mercy of unpredictable boat traffic will defeat some of the greatest benefits of light rail.”

“Please make this crossing a tunnel! If it absolutely cannot be done, please include pedestrian and bike lanes in the crossing. It can be Seattle’s version of the Tilikum crossing in Portland.”

Several comments echo the need for passenger and bike access, regardless of form. “Ballard Bridge is terrifying to cross!” explains one commenter. Another suggested a static bridge that was high enough for marine traffic to pass underneath without opening. Digging a tunnel under the Ship Canal isn’t unprecedented. A couple miles to the east, the University Link of light rail travels under the Montlake Cut — the boring machine dug just 15 feet under the water’s floor.

But a tunnel also has its complications: for example, how and where would the elevated line transition to the tunnel on both the Interbay and Ballard sides?

Under the “risks and issues” section of the Sound Transit planning deck for Ballard light rail, the movable bridge was #1 on the list. It looks like we can expect much more debate to come.

Bring back the monorail!

I think we should debate the issue for 20 years and then in the end go with a completely different option.

I’ll choose whichever is faster to build. My taxes will be paying dearly for it, I’d like to actually use it someday!

I know the reason for opening the bridge for every boat that passes by but it seems long overdue to revisit the silly maritime law that allows it, especially for non-commercial vessels. Ridiculous to have hundreds of people wait for a single boat to pass….

A new bridge should be built…about 15-20 feet higher than the current bridge. That would accomodate 99% of the boat traffic without moving. So it would be a permanent bridge and waterways to the east of it would be cut off for taller boats (of which there are very few). That would be the cheapest and fastest and bestest solution.

Been saying for years now that the Ballard Bridge needs to be demolished and replaced, replacing it with a wonderful high one that doesn’t stop traffic. Now this WOULD be “progressive”. But instead, we’ll get studies, impact statements, blue ribbon panels and citizen oversight review boards AND get nothing accomplished. Now that IS Seattle style baby! Paralysis by analysis. So yes, let’s add another 200,000 people here and then tell us about outdated infrastructure. How the F is the not enough money to do this when so many taxpaying people are here? Imagine all this money being spent on “created” homeless folks actually going to benefit the people paying it???????????? I know, I know, it sounds radical.

Many of us in the community are pushing for a tunnel to Ballard and a route west of 15th Ave. W. Sign our petition! https://www.change.org/p/mayor-durkan-move-light-rail-west-of-15th-ave-w-and-build-a-tunnel-to-ballard

JUST BUILD IT HIGHER. Is that seriously not an option? The cheapest, fastest to build, logical approach isn’t even considered?

@Scott: Please tell us your brilliant plan on how to demolish and rebuild the bridge, since you’re SOOOO much smarter than us dumb progressives. Also tell us how to pay for it. Finally, tell us how you’re going to deal with 60,000 cars a day that need to get rerouted for 2 years.

There’s also the sad fact that federal money that has helped revitalize infrastructure in the past, has all but dried up. But hey, we have to continue to pay for ever increasing tax cuts for the wealthy somehow!

US law surrounding the navigation of inland waterways restricts the possible height of a fixed-span bridge to a height equal or greater than the height of the current lowest-height fixed span bridge (such that it cannot create a new limit to the height of a vessel traversing beneath it). That means we’re looking at a structure the size of the Aurora Bridge, but without the benefit of high hills on either side of the canal to bridge across. Not sure that’s exactly tenable; it would be a huge structure.

I believe ST’s currently planned option is a much higher drawbridge than the Ballard Bridge, which would limit the number of times it needs to be opened daily. I’d still prefer a tunnel alignment, but I think a single-pylon cable-stayed bridge could also be an interesting choice. They tend to become regional landmarks.

@Alex – They have considered building it higher. The bridge approaches would be massive to have a non-moving bridge. You are looking at it starting around Market street just to be able to get to 100 feet over Salmon Bay.

I supported a Ballard to UW routing (faster to build, cheaper) but SDOT never liked it, so here we are.

Yeah, because the world doesn’t revolve around Ballard. There is LQA, Belltown, etc. But I don’t think most people in Ballard realize this.

Guest
Do it this way!

Why are you talking to SDOT about a Sound Transit project? That’s like talking to your dentist about your hip pains.

A movable bridge can’t be an option. As we all are well aware movable bridges fail. For those of us in cars or bikes we can use the Fremont bridge, but I’m not sure a light rail train will have the same alternative :-)

It’s easy for Sound Transit to say they will maintain their infrastructure to the gold standard but based on all the elevator and escalator outages on equipment that was just installed I’m highly skeptical that they will ever be able to maintain a movable rail bridge. Unfortunately 40 years from now when I’m still paying property and sales tax for a bridge that’s always out of service I told you so won’t provide a lot of comfort.

Guest
Hey, Look at me in my yacht!

Can someone remind me of the vital economic reason for stopping traffic and using these outdated drawbridges for what appears to be mostly pleasure craft? Is there a secret, invisible fleet of freighters and teeming ports in Lake Union that I’ve never notice in 2 decades? I just see yachts and the occasional gravel freighter for the new construction sites.

The Ballard rail line could then use the Salmon Bay bridge uninterrupted. The canal isn’t a shopping corridor, and sadly much of the fishing traffic has dwindled during this last boom cycle.

Unless I’m off the mark here, there isn’t much industry left on the the interior lakes or the canal east of the Ballard Bridge.

@Ballardite: SDOT and Scott Kubly actually had a huge say in the current alignment. Allegedly, they were more concerned with serving Amazon (Denny station), Gates Foundation (SLU station) and Expedia (Smith Cove station) than going for a faster route that served LQA and Fremont before hitting up Ballard (Ballard Link Option D from way back when).

I’m just glad that somebody came to their senses to have it grade separated along Interbay. The initial preferred route was at grade through Interbay.

There is no Belltown stop under the alignment. Thanks Truth for helping to explain. .

Tunneling below the canal (as done at the UW campus) is by far the best route. Providing past input on a intermodal transportation project between 2010-2015, these type of century-long+ decisions should not made by a straw poll or by the whim of the current transit operator. Evaluation criteria need to be identified first… followed by engineering assessments. Criteria may include access to jobs, travel time, noise pollution, impacts to ship traffic, impacts to vehicular traffic, initial cost, maintenance cost, etc,..)

Look at this petition:
https://www.change.org/p/mayor-durkan-move-light-rail-west-of-15th-ave-w-and-build-a-tunnel-to-ballard

@David and/or Matt if that is your real name (looking at you Hollywood) – stop trying to push your petition. I bet you live in magnolia and are just trying to get a stop close to your house.

No light rail in magnolia. I don’t want to have to ride with the people from the homeless camp they are building there.

Jeffrey, David and Matt are two separate people. I believe David lives in Magnolia. Not sure about Matt. But, regardless… a stop at 20th and Dravus is just *barely* in Magnolia. Some don’t even think of it as being in Magnolia. I live 8 blocks west but since there’s a steep hill intervening this wouldn’t be particularly convenient for me, and it certainly wouldn’t be convenient for people who live in Pleasant Valley or on the west hill.

I think a stop at 20th and Dravus would be great because it could revitalize the area down there. For stops close to my house, I have the 24.

Lex: it’s not a homeless camp, and 36th and Lawton is a long way from 20th and Dravus.