City moving ahead with plans to reopen Webster School, meeting planned for March 19 – My Ballard Skip to main content 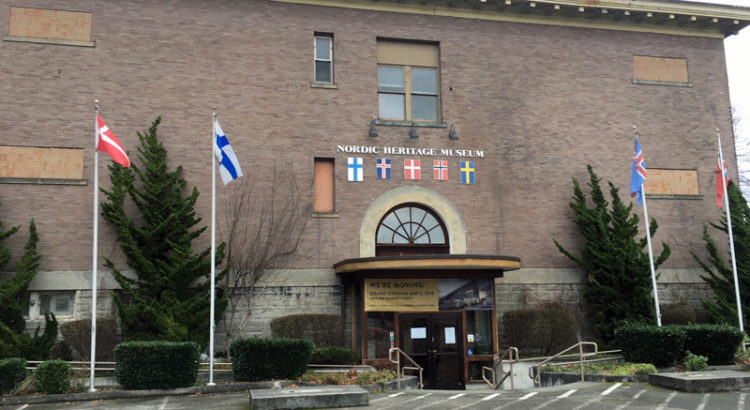 Now that the Nordic Heritage Museum has moved out of its old facility at 3014 NW 67th St., the city is working on plans to reopen Webster Elementary School at the same location.

With Seattle’s population growing like crazy, the school district is looking for more capacity. Now the museum has moved to Market St., the plan is to reopen Webster School with room for 450 students in time for the 2020-21 school year.

There’s a lot of work to do in the meantime. The school district plans to build a new gymnasium and covered play area on the west side of the property. It needs to seismically-retrofit the 1908 building, as well as make upgrades throughout. And then there’s the complicating factor that several parts of the school were designated a Seattle landmark, and key features of the facility must be preserved.

To make these additions and improvements, the district is requesting some modifications to zoning regulations for height, parking and noise, to name a few. To ensure neighbors are plugged into the process, the city is inviting residents to attend a community meeting about the project on Monday, March 19 at 6 p.m. at Ballard High School, 1418 NW 65th St.

Any word on what grades the school would serve? Seems like Ballard needs a middle school.

Send the Magnolia twerps there

Did you know Webster school is named for a senator from MA with no ties to Seattle? He is best known for a speech in Congress that gave new life to slavery in America. Wanna help choose a more appropriate name for our neighborhood school? https://www.facebook.com/groups/1928841744042864/

The PC-ness of Seattle is ridiculous. Just say its named after the small little guy from the 80’s tv show. “Problem” solved.

Besides being a boring response, Floyd, it’s not really a matter of political correctness. The school hasn’t been open for decades. I haven’t talked with anyone that remains attached to the name Webster. I think it’s a great opportunity to choose a great name for our community school.

Thank goodness! Poor Adams is busting at the seams. Perhaps they can get rid of those portables and get their playground space back.

Alex, your sane and completely measured response has no place here! This is where the olds complain about anything and everything.

You’re 100% correct. A school named for anyone or anything that has to do with slavery has no place in Seattle.

So are we going to rename Jefferson street?

If the City Council were to rename it “Floyd Haberman Street,” I might consider the idea. :)

The article says “the city is working on plans to reopen Webster…” in the 1st paragraph, then “the city is planning to build a new gymnasium and covered play area…” and finally “the city is inviting residents to attend a community meeting …” The City is not doing any of this, it is the Seattle Public Schools! The City will have a role in negotiating a joint use agreement for school use of Webster Park (which the City bought from the district several years ago), hopefully with reciprocal community use of the new gym and other conditions.

@Dave We’re using the term “city” broadly here, as the school district is part of the city of Seattle. We did make one change in the story to further clarify. (And it was the Dept. of Neighborhoods that distributed the meeting invitation, not Seattle Schools.)

I suggest the “Winfrey-Bezos Academy”.

If the city owns the property then the city might consider building some low/mid income housing there. Ballard could use some.

“The PC-ness of Seattle is ridiculous. Just say its named after the small little guy from the 80’s tv show. “Problem” solved.”

@ Swedes You are using the term very broadly, probably too broadly. The school district is no more a part of the City of Seattle than the Port of Seattle is, or King County is. They are all distinct, independent, municipal corporations.

I am getting really tired of everything with a name that someone doesn’t like needing to be changed. There are hundreds of buildings in Europe alone that have a dark past but they keep it up. The number of people who have their feelings hurt over something that happened a LONG time ago need to get tougher and focus on bigger problems.

BHSALUM2008 is a terrible name and you should change it.

THE GOOD NAME HAVER is by far a dumber name.

You’re all racist for even having this discussion. Any school with the name Jefferson in it should be automatically renamed Barack Hussein Obama high school. End of discussion. Easy choice. Trump supporters like Floyd and BHSALUM are the same people who wanted to keep all those terrible statues of General Lee, George Washington and Thomas Jefferson up in the South. Disgusting

MARSHALL MATHERS, I really hope you read this. So if you lived in Italy, would you want to tear down the Colosseum because of its history?? You must be so closed minded that it hurts to think. I wish people on this forum shame you for accusing someone you don’t even know for voting for trump. You don’t know how stupid you sound by doing that. To make this crystal clear I voted for Hilary, I do believe there needs to be tougher gun laws, I’m tired of waking up and seeing schools have been shot up. I am also tired of being taxed out of the city I grew up in and watching it be trashed. That being said, this country allows me to have my own thoughts and also allows me to vote for whomever I want without any punitive action from the government. Other countries would love to have that ability. So you MARSHALL MATHERS need to grow up and not want to destroy everything that has had a negative past and focus your energy on making sure it doesn’t happen again.

Too bad some of the adams overflow can’t be channeled to the new Loyal Heights Elementary which has capacity for over 600 students. Instead the school district is planning to bus kids from along Holman Road to try and fill it up when it opens.

There 3…yes three…schools in Seattle named John Hay!!! Who is john hay and what does he have to do with Seattle??? A petition is already under way to the school board to not even CONSIDER changing the name by alumni!

Ballardite, they are sending some of the Adams kids to the new Loyal Heights. Starting next year the Adams boundary is moving south several blocks, but they are grandfathering kids currently enrolled in Adams (if families wish to keep them there).

A very useful article that I found just in time. The next month I have to hand over the project, and we still could not get together with the team to organize our actions, we even had to resort to the help of top article https://gradesfixer.com/free-essay-examples/career-goals/ to submit the project for a good assessment close this item. But your article inspired me to continue working as a team, thanks!