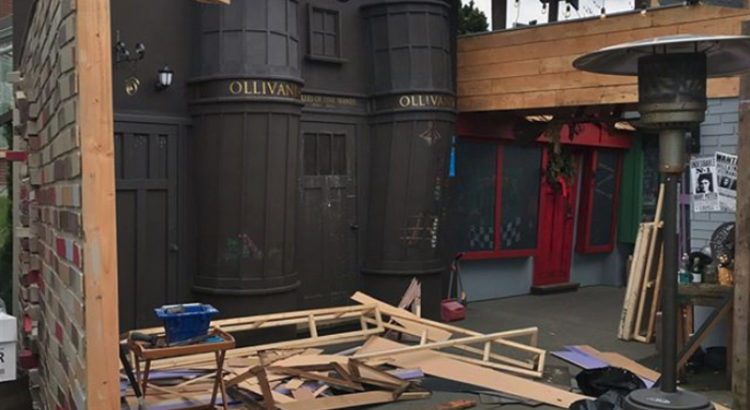 After one last hurrah over the weekend — a fundraiser for the Phinney Neighborhood Association — Ballard’s Diagon Alley is coming down.

Creator Jon Chambers posted these photos this morning of the gradual deconstruction of his magical project, which first debuted over Halloween. Over the next four months, Diagon Alley will be taken down, packed up and moved to Camp Korey, a Mount Vernon camp for kids and their families who are dealing with life-altering medical conditions.

Meanwhile, Chambers is still thinking about his next project: building a life-sized version of The Burrow from Harry Potter on a farm in Snoqualmie Valley. He said Warner Bros’ legal department told him he couldn’t build an exact replica, so he’s planning to create his own version of the crooked house.

Finally, this was never up to code…

Floyd Haberman, you’re the kind of person that makes me put my palm to my forehead and says “I hate people” get over yourself. This guy did it for thousands of people to enjoy and raised a lot of money in the process for a good cause.

It’s not so much that they are loud. More like why are my tax dollars used to burn a bunch of jet fuel just so some guys can take military equipment out on a “joy ride”.

….. you need a serious dose of vitameatavegamin
https://www.youtube.com/watch?v=cwkzNclZR4s < so you know what that is

Okay, Floyd, you are a contrarian, a misanthrope, and poorly informed to boot. As the Diagon Alley construct was intended for temporary viewing not habitation or use as a place of business, no code applies. It was a visual display just like all those front yard Christmas scenes that pop up on people’s property the weekend after Thanksgiving. Pretty sure the Santa’s workshops displays and crèches I see are not used as toy manufactories or birthing rooms and are therefore not subject to code requirements.

As to the Blue Angels: Active duty pilots must still maintain flight hours and combat readiness status so will use the jet fuel and equipment while serving in any assignment. The military hit upon programs that highlight their professional skills while doing soft recruiting and both the Blue Angels (USN) and Thunderbirds (USAF) fill that bill. Everyone’s tax dollars pay for ALL military pilots continuing training and practice flights. The Blue Angels (and the Thunderbirds) just share their training displays with the public in a way Admiral Nimitz envisioned would highlight their skills and excellence.

Floyd is just a sockpuppet of our friendly neighborhood blog-troll. Please either troll him back or don’t feed him. If you feel the need to respond with a well thought out response, at least make fun of his tiny hands or something to close your thought. It causes his snowflake personality to kick in and is quite entertaining to watch him devolve into the sub-human he actually is.

Pro tip: Blog-trolls are scared of homeless, sunlight, facts and that their mother is constantly hounding him in the basement every afternoon to go buy her a bag of pork rinds, even though he’s 45 years old and is for reals going to get a job, mom, so lay off!

Actually Erin, the Daigon Project should definitely have had permits– if not building, then street use.

Before you go off calling people misanthropes, perhaps YOU should inform yourself rather than spouting off as usual. You should really take your flowery language to reddit ‘I am smart’

The creators of this travesty were constantly notified that they were in violation and defied the court order. Shame!

Truth, I heard you’re a Level 15 Mage. Look out for the dragons and hobbits and don’t lose the 12 sided dice!

And they prefer the term “halflings”, you insensitive clod!

@Truth
Ala-cazam,
Ala-cazatz,
I just drank a kombucha
And turned you into a bat.

Thanks so much to the family that made this fun for everyone. And what a great use for the project!!!!!