If he can get the permits, here’s Diagon Alley creator’s next project – My Ballard Skip to main content

With the Diagon Alley Project shutting down on January 20th, creator Jon Chambers needed some peace and quiet at home — and a new challenge.

For those Harry Potter fans out there, you’ll recognize the Burrow, the magical family home of the Weasley family (above). Along with the Edith Macefield-inspired “Up” house, the Burrow is one of the most iconic movie homes of all time.

“I can’t share a whole lot just yet,” Chambers told My Ballard. “I can say we are in the early planning phase for building a life-size replica of the Burrow in the Snoqualmie Valley on a non-profit farm that centers around agricultural conservation and education.”

And here’s the sketch he shared on Instagram over the weekend: 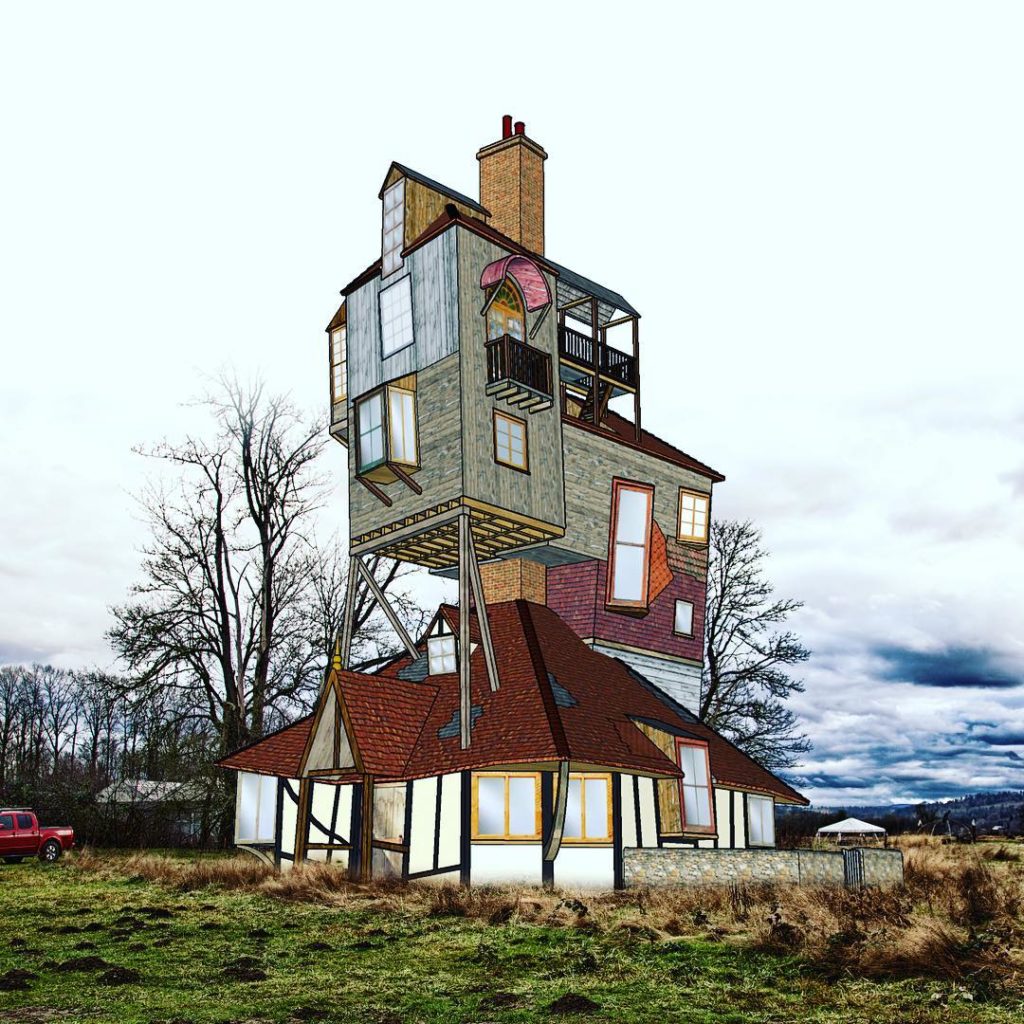 You see, the Weasley home is held up by magic, but to build a real home, you’ll need… permits.

“That’s going to be a major hurdle,” he admits. “With all the planning and approvals we have to go through, construction won’t start until 2019, if approved.”

The Burrow Project, if it becomes a reality, would dwarf Chambers’ driveway-sized Diagon Alley Project. As he told us, “Stay tuned.”

I didn’t visit the local ‘Daigon Alley’ but could see the interest for fans of that popular book series.

But this is really taking things too far. That ‘house’ is supposed to look like it’s been added on to for generations, (which is why it’s not very attractive). If the location is “a non-profit farm that centers around agricultural conservation and education” why would you spend $1mil + on a folly that doesn’t serve any of that purpose whatsoever?

The building looks kind of ridiculous and doesn’t represent anything remotely associated with conservation.

Bernard, clearly you aren’t a Harry Potter fan! The Diagon Alley project was wildly successful and raised lots of money for charity. Can’t some things just be pure and simple fun?!?!

Bernard, you must of not read much of why Johnathan takes on these adventures. The diagon alley project began as a family project to impress those he loves most, his daughters. From there it turned into a community project and brought many families together. Suddenly, it exploded, media was and is all over this from all over the world. The idea to raise money was from his family and him after a passing from pancreatic cancer of a close friend. I never heard of pancreatic cancer taking anyone until they raised awareness from the project aftet seeing his video. I was awestruck from seeing how many smiles this brought to the kids on the news videos. So I drove from L.A. to donate 2 of my dragons. I saw his family put everyday life aside to welcome visitors, and never did they complain about how much work it was to maintain the project. In fact they kept adding stuff to it. I never met them before and they opened their doors to their warm and kind home to me. So my point is maybe Bernard you should visit their home so that you can see how a kid’s smile can… Read more »

I have to agree with Bernard.

I did go to the Daigon Alley exhibit and as impressive as it was on the surface, it was built like a movie set (not very durable). I worry about that ‘structure’ being re-used at some children’s camp as it was clearly not intended to last very long.

The building above (which is not really one of the most iconic movie homes of all time) looks like it would be very dangerous if someone tried to build it. Is it just supposed to be an object in the landscape? Because none of the scenes of that movie actually took place inside the house.

Again, I think it’s great that $40k was raised, but that’s really a drop in the bucket for the time/resources involved over 2 months. If some rich person wants to build a fun project– great, but don’t pretend it’s all about charitable giving

@Bernard: One of the things that bugged me about the Weasley’s house is: they are supposed to be somewhat decent magicians. So if they can use magic to hold up an otherwise impossible to maintain structure, why couldn’t they use magic to make a house that doesn’t look like it’s straight out of Covington?

Just seems like a waste when there are so many people in need in this city.

Embarrassingly tacky and lowbrow, even for Seattle.

How exciting! I would love to help with the knitted and crocheted furnishings for this!

@Truth
I can’t hear you. I have Star Wars action figures jammed in my ears and and I’m deep in the dwarf caves in Middle Earth. Resist!

@Access: First, Dwarves have mines, not caves. And Khazad-dûm is no mine!