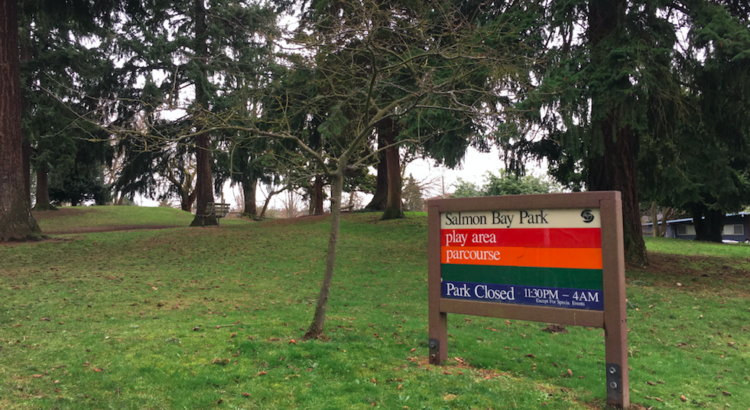 After a report of a sexual assault in January — and growing concerns about graffiti and drug use — Loyal Heights neighbors have formed a new group to take better care of Salmon Bay Park.

Among the group’s priorities: establish a block watch group, apply for public funding to revitalize the park and organize social events to connect with neighbors.

Organizers are looking for anyone who’s interested in joining. The group’s kickoff meeting is Thursday, March 22nd at 6:30 p.m. at Ballard Homestead. If you’re interested in attending, you’re asked to RSVP by this Friday by emailing sbpstewards@gmail.com.

I wish them all the best. It’s great to see neighbors taking action on keeping parks safe and fun.

I thought the city was going to replace the workout area they removed from the park years ago. Also sick of all the idiots that use Salmon Bay as a off leash park.

My father lives across the street from this park. His vehicle was stolen recently, he got it back a week later after the perps rear ended someone and tried passing off his insurance card. It had been being lived in by some serious drug addicts, it was full of stolen merch and paraphernalia(needles and a glass pipe) The vehicle was then broken into AGAIN two weeks later. Luckily, my dad was using a security device that they couldn’t defeat so he still has his vehicle, but the feeling of unease is tough to shake off.

I’m sick of all the Petes bitching about the cute and friendly dogs in Salmon Bay park.

Well, Suck it Pete, your chosen pen name is pretty crude, for starters. Secondly, we do have a leash law. I, too, am frustrated when I have to worry about my kids being run over by an enthusiastic labrador fetching a ball. If we want to change it to an off-leash park, that’s fine, but right now, it’s not.

If I was the Park President, I wouldn’t even allow dogs ON leashes.

To dog owning narcissists, everyone just lives in their world. Allergies? Hygiene? Safety?
Screw that!

There are many fine cities that require leashes and muzzles. Strangely, these places are highly sought after and have a high quality of life. This trashy new American trend of forcing everyone to cope with your dog needs to be addressed.

Bunch of snowflakes. Should we also ban peanuts since people might be allergic?

@Concerned Ballard Strawman Peanuts don’t lick your food or bite your kid’s face. Dogs on the beach (wildlife preserve) disturb endangered birds and other animals. Dog owners need to learn a concept called “boundaries”. It’d especially funny in an ultraliberal, oversensitive city – but then again, ultraliberals are mostly narcissists anyway. Pro Tip: That overpriced brunch bacon is was just as smart as your dog before it ended up on the plate, and we don’t worship pigs. “According to the Macmillan English Dictionary, if a place or an organization is going to the dogs, it is not as good as it was in the past. People often say things like “This country’s going to the dogs. Things aren’t like they were 30 years ago” or “This train service is going to the dogs. The trains are always late. The seats are uncomfortable and the fares are high”. The origin of this expression is believed to be in ancient China where dogs, by tradition, were not permitted within the walls of cities. Consequently, stray dogs roamed the areas outside the city walls and lived off the rubbish thrown out of the city by its inhabitants. Criminals and social outcast were often… Read more »

I’ll stop taking my dog places when kids are banned from flights.

Haha, I don’t have kids but if I did – let me tell you they would not be the undisciplined brats that these permissive, career obsessed hipsters allow to run roughshod over any and all common decency. But thanks for the reminder that glib Seattleites don’t like anything that isn’t an extension of their own ego.
“Kids are so much work! Eeew!”

Still, in Seattle kids are rarer and rarer, so the spinster dog/cat ladies and the soyboys hoping to attract them have gone “dog crazy”. Kinda sad, really. Once upon a time people had interests besides staring at smart phones and things to talk about besides “what breed is your num nums?”. Snore.

Tell me about how “humane” it is for a cubicle worker to have an enormous husky in an city apartment lifestyle? Neato. We all get to deal with an edgy, unhappy animal just so some nerd can show off his rare breed to other nerds before returning to their phones. Impressive!

My grandson has a dog and it’s pretty nice. It’s pretty well behaved at our (Presbyterian) church. Although the preacher doesn’t seem to like it.

Guest
WTF is wrong with you people

If only someone would clean up Ballard Commons Park on 22nd and 57th its turned into a rest stop for the homeless. I can’t even take my dog there anymore in fear he might step on a hypodermic needle from the junkies. I had a buddy walk by there mid day and one of the homeless guys tried to rob him. Took police 4 hours to call back only to ask if he would still like an officer to come by at some point. Ballard used to be a nice place to live, now, I don’t leave home unless I’m armed. Witch is truly a sad thing to have to do in a once wonderful neighborhood to live in.