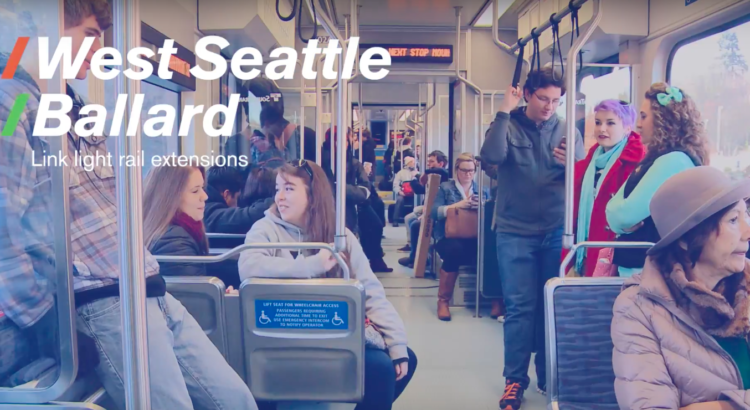 Now that the “early scoping” public comment period is over, Sound Transit is going through the Ballard and West Seattle light rail feedback, looking for consistent themes. They’ve boiled down their early findings in a deck for a presentation this Wednesday to the stakeholder advisory group.

As we’ve been reporting, several community groups — and Councilmember Jeanne Kohl-Welles — are urging Sound Transit to consider moving the Interbay line from 15th Ave. W to 20th Ave. W, building a tunnel under Salmon Bay and creating an underground Ballard station at Market St. The goal is to limit impact on businesses, avoid taking away traffic lanes on 15th and bypass bridge closures from Ship Canal boat traffic.

But that route isn’t the only one that was proposed. The deck shows three other alternatives, two others to the north of 15th Ave. W and one that veers to the south and comes into Ballard on 14th Ave. NW (above). You can see the deck here (.pdf).

West Seattle residents are proposing lots of alternatives, too.

This is only a preliminary report — a final feedback summary will be available in a few weeks. Then the elected leadership group will propose a preferred alternative to the Sound Transit board early next year. (Via West Seattle Blog.)

14th Ave makes sense — the street is extra-wide, since we already have the right-of-way up the middle left over from the old trolley. But I’d stay on 15th through Interbay, as there is and will be a lot more population close to that route versus 20th.

This is a bit crazy. The only reason this Interbay route was picked over others was because it was more economical than other options that needed tunnels.

The plans that went under Queen Anne and/or Fremont were ruled down because they needed expensive tunnels, yet they were popular with a much higher percentage of the city residents.

I’m all for underground transit, but if we change this plan, let’s go back and determine if with increased costs, this idea even makes sense.

Why is the tram going east/west in this photo? I thought it was going north to the ship canal?

@Floyd North is to the right on this map. They should have provided a compass arrow.