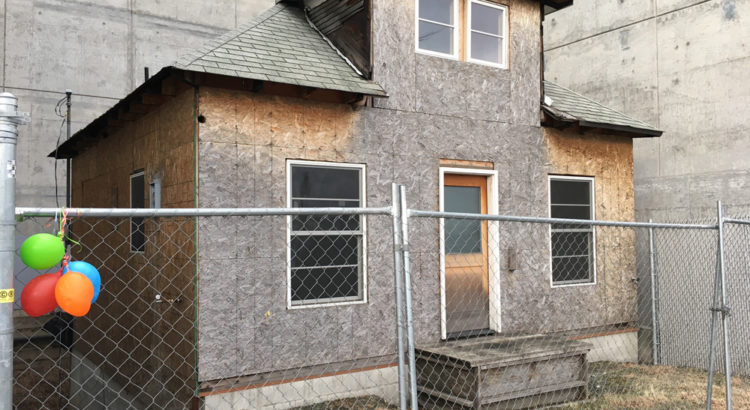 Thursday update: Now that we’ve reported the house is staying, there’s a new Facebook event, “No Demolition Day,” scheduled for Saturday between 9 a.m. and noon. “Come tie a balloon to the fence to show your support,” explains the event listing. “Balloons and markers will be provided!”

Update: While rumors fly about the fate of the Edith Macefield house (see below), Ballard Blocks developer Regency Centers told My Ballard this afternoon that they’re keeping the house.

“We have no plans and no intention to demolish this house,” said Craig Ramey, managing director of Regency Centers.

In fact, Ramey said they’re exploring ideas to update the house and tie it into Ballard Blocks II, which is under construction. Some of the ideas include turning it into a community and event space, a pop-up space for local eateries and a flower shop. He said they’ll reach out to the community in the coming months for more ideas.

A new PCC is under construction in Ballard Blocks II, right across the street from Macefield’s house. Further to the east, the second phase of Ballard Blocks II will include offices, retail, a child care facility, a bakery and a restaurant.

Do you have ideas for Macefield’s home? Leave them in comments, and we’ll keep you updated.

Earlier: A Facebook group dedicated to the Edith Macefield house has posted an event claiming the home will be demolished this Friday at 6 a.m. The rumor even sparked a story on KING5.com.

We’ve been keeping a close eye on the famous house at 1438 NW 46th St., and a city document search shows that no demolition permit has been issued. At least yet.

“No permits have been filed for demolition,” confirmed Bryan Stevens with the Seattle Department of Construction and Inspections in an email to My Ballard. “For small structures, they are often fairly simple permits to obtain. So it’s possible one could be submitted later today or tomorrow morning and be issued by Friday.”

A demolition permit is required before a property owner can demolish a structure, and work must begin after 7 a.m.

But this just could be another rumor, and there have been many since Macefield passed away in 2008. However, previous attempts to save the Macefield home — by transporting it or turning it into a landmark — have all failed to raise enough funding. So the end could be near.

We’ll be keeping an eye on this link — and you can, too — and we’ll let you know if a permit is issued. We’ve also reached out to the Ballard Blocks property managers for more information.

For those new to the neighborhood, Edith Macefield refused to sell her home to the developers of Ballard Blocks, who proceeded to build a retail complex around her. Her fight was believed to inspire the Disney movie “Up”, which explains the balloons that visitors often leave at the house.