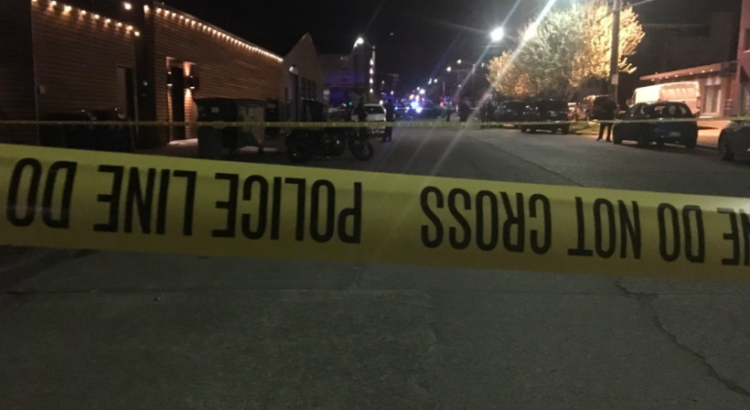 Updated: The Tacoma News Tribune is reporting the victim is Robert Baker, the brother of Budda Baker, the UW football star and now Arizona Cardinal. Budda Baker posted this statement:

“On behalf of the Baker Family we want to thank everyone for their generous outpouring of love, support, and prayers during this extremely difficult time at the passing of our dearly beloved son, brother and husband, Robert Baker. We ask that you respect our family’s privacy in this difficult time. – The Baker Family”

Earlier: Just before 2 a.m. this morning, police raced to the 4900 block of NW Leary Way — near Cedar Room and Shelter Lounge — for a report of a shooting. They discovered a 29-year-old man with a gunshot wound a block away at NW 49th St. and 17th Ave. NW.

“Officers performed CPR until relieved by Seattle Fire. The victim was pronounced dead while being transported to the hospital,” says Detective Mark Jamieson.

Bryan Orendor told My Ballard he was outside Shelter Lounge with his girlfriend and two friends when he heard the shots.

“I heard 3 booms which sounded like fireworks,” he said. “As a second passed, a couple more shots went off and I grabbed my girlfriend and told my buddies to run and get inside Shelter now, there is an active shooter around the corner. As we ran inside, we ducked behind the bar, and I just remember everyone crying and yelling ‘lock the door, lock the door!'”

A large number of officers searched the surrounding blocks, clearing buildings looking for the suspect. (Silver posted updates in the My Ballard Facebook Group last night.) But so far, the suspect remains at large.

Investigators arrived and processed the scene for evidence, taping off the immediate area.

This is Ballard’s second homicide in a little more than a week. Last week officers discovered a gunshot victim inside a camper at 15th Ave. NW at north end of the Ballard Bridge.

(Top photo courtesy of KING 5’s Doug Dillon, who has a few more photos here. The video above is from KOMO’s Dan the Truck Guy.)

Yea it’s definitely time to move. First it was just the usual homeless people pulling crap like stealing and harassing people. Then people started getting robbed. Then a few weeks back some kid got stabbed in the back. Now 2 homicides in a week. At $2000-$3000 for the average rent here in Ballard this is not what I signed up for. I can’t wait til my lease is up.

You can move now. Your landlord will fill your space and you won’t be liable for remainder of lease. See ya.

The above 2 comments epitomize our sad situation today; 1 speaking truth thoughts and coming to an actual conclusion, and the other mimicking, being a troll/snarkster, pretending they can’t see a thing. Sort of a snapshot of America as a whole. So “No whining” will officially tell us all when it’s real bad, and THEN it’s time for group thinking.

not a good situation in the neighborhood and seattle in general re: general lawlessness and potential for violence.

GUNS ARE THE PROBLEM.

If you think otherwise, you’re a gun owner and, therefore, part of the problem.

Living in Seattle the past couple of years really challenges your mental health. With the increased crime and traffic and costs of living and taxes and goofy government policy’s it’s downright depressing at times.

Are you guys going to blame the homeless for this one, too?

Or are you going to say it’s Mike O’Brien’s fault because he has ‘tied the hands’ of the police who often don’t do their job because it involves too much paperwork?

Fortunately I bought a long time ago so didn’t ‘sign-up’ for anything (as if your high rent entitles you to live in a crime-free neighborhood– good luck with that!)

When are the Syrians arriving?

Councilmember Mike O’brien is probably thrilled. This is his vision for Ballard.

Your analysis of their conversation is quite delirious and it sounds you’re just really trying to force the national partisan divide onto a local neighborhood blog.

There is nothing wrong with feeling entitled to a crime-free or low-crime neighborhood whether you rent or own. It doesn’t make you ignorant, or a nimby. It’s folks who feel like this kind of stuff is a “day in the life” of Seattle who keep the bar low for what the community could be. If you own here and you feel safe and comfortable here, then I respect that… but the respect should go both ways. After living in a world class city on the East Coast for many years, I can tell you that you can have both an expectation of safety and the tolerance for difference that comes with a well run city and an intelligent populace.

It’s clear that the stand down orders given to the police from the Mayor and City Council for petty crime and possession are escalating into increased felony crimes. The fabric of our society has been torn by people who are immobilized (who we elected.) If you want public safety, hire more police, revive enforcement and prosecute crimes. And provide decent treatment in jail.

I guess I might be a Nimby. Here’s a list of things I don’t want in my proverbial “backyard”.
1) Thieving junkies prowling cars and loitering in front of every business
2) Tweakers and their edgy pit bulls feeling welcome to harass and assault people
3) Tweakers and their edgy pit bulls camping or living in RVs
4) Tweakers chopping up stolen bikes along the trail, or breaking into cars
5) Junkies feeling “welcome” to slam heroin in public
6) Murderous drug dealers competing for turf. The drugs come from somewhere, Geniuses. Even more comical, when the cops send one of these creeps to the morgue the city punishes the cops. Muh Che Taylor!
7) Degenerates, junkies, and known sex offenders hanging out the LIBRARIES. Read more books! Comedy
8) Never ending tax increases that SUBSIDIZE these criminals. Not only do we have a filth and crime infestation in Ballard, Durkan wants us to PAY MORE for the privilege

Wait, where’s the post that says something like, “This is nothing new. People have been getting murdered in Ballard since I moved here in 1977?” I’d like to see the concerns expressed by some folks here negated as soon as possible! We don’t need the distraction. Oh look, a cool Pilsner is on tap at !!!

The world changes. Ballard and Seattle is changing…again. It’s not the first tech boom for Seattle. Seattle survived the last one. It can survive this too. But Ballard will not be the same. Austin isn’t. Denver, Atlanta, SLC not the same. But staying or going, neither is wrong or stupid. We’ve been retired here for three years and we love it.

When my mom and us moved here in the mid 70’s, there was a gunfight at the Old Pequliar, at the time named the Valhalla, the victims running to the ER at Swedish, leaving bloody footprints all the way there. That’s how the cops traced him. Old town was a bunch of creepy unused places, Hattie’s Hat had mostly drunken fishermen rolling out of it. Looks like Ballard is going back to square one with higher rents included.

I for once was happy not to hear the loud young drunks last night. Usually they walk down my block, very close to the Shelter, shouting at the top of their lungs at 2 am like they have a hearing problem, I’ll be happy when they all move out of here and back to their ‘safe’ enclaves in Cali or Kansas.

Forgot to mention – the Shelter used to be a garage. Back in the 70’s, a young woman’s body was found in one of the bathrooms there, She’d been abducted from a bus stop near 15th and 80th. Cold case not solved until a few years ago via DNA. Perp was in jail at the time.

That is seriously a terrible news… I hope the police can find the responsible for this murder. This all comes to
one thing there are loads of guns out on the streets and then things like these happen.

I love this neighborhood, have experienced cities with worse problems, but just don’t see why our neighborhood needs to be this badly managed. I hope we get better management. Elections can’t happen soon enough. People do have options but not always good ones.

Pretty easy to leave if you simply rent. It’s only a matter of waiting for the lease to come up then renting a u-haul for $80. Easy to say… Buhbye.

Owners have a different bar to get over. Higher transaction costs with getting a realtor, buffing up the home for sale, stepping through the sales process, then watching 5% to 7% of your homes equity vanish into realtor fees, taxes, etc. If a median home is $800K that equates to at least $40K out of a homeowners wallet. It sucks.

Re: cities change etc just move
It’s a very sad attitude that says “we prefer to lose our neighbors than deal with public safety issues”. What a joke. Not to mention the fact that working people can’t just sell their nonexistent $750k house and flee to Boise.

Regarding declines in Atlanta, Denver, Austin, and of course, Seattle: what do thee cities have in common, politically? Bellevue is pretty safe and clean and the police response is reasonable.

People here have higher expectations for tiny restaurants on yelp than they do for a city that mismanages billions of dollars in resources.

“A large number of officers searched the surrounding blocks, clearing buildings looking for the suspect.”

let me guess, they didn’t knock on the doors of our RV “neighbors”, did they?

Every single time there is a serious crime in Ballard, the same 3 or 4 guys go on Nextdoor and My Ballard and they lie about crime going up when it’s not, and lie about homeless people being to blame when they’re not, and lie about Mike O’Brien being to blame when he’s not. They incorrectly predict that O’Brien will not be re-elected, and in fact two thirds of District 6 votes for him (again!), without him even needing to bother to campaign.

Same 3 or 4 guys. Same lies. They bat a big fat zero every time. I guess you could say they’re batting 1,000 at being wrong. That’s a kind of winning. Sort of. Congratulations?

When are you going to learn? Are you ever going to change your tune? How can you go on being so wrong for so long and never admit it?

@Elenchos
Hey, we missed your high school level comments but welcome back!
Those of us that have lived and worked in Ballard/Fremont for the last 20yrs have all seen the same decline in behavior and safety during the last 3yrs. I know it’s time consuming to stage marches supporting felons, taking dog selfies for your instagram, or crocheting a pink p*ssy hat, but maybe it’s time you talk to some local biz owners before Sawanting everywhere, Amiga.

As if the bums, drug dealers, dopers, hustlers and various scum bags who have invaded Ballard, housed and unhoused, are all somehow unrelated, orbiting in their own separate universes instead of what they actually are, a fetus organism being welcomed and encouraged by Weepy Mike O’Brien and the guilt-ridden, phoney compassion crowd.