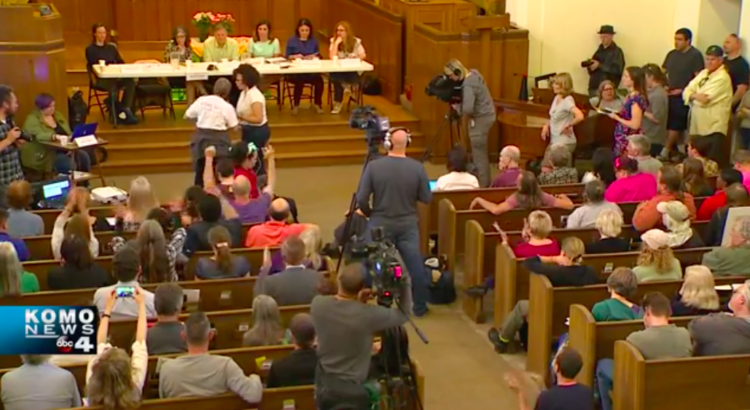 Seattle homelessness, housing, taxes and growth are controversial enough on their own, but when you combine them all in a town hall meeting led by Seattle councilmembers, get ready for fireworks. Or worse.

KUOW even went as far as to say, “Let May 2, 2018 be known as the day that Seattle Nice died.” There was even a fake homeless encampment set up outside.

Adding fuel to the fire, a few hours earlier Amazon announced it was pausing construction over the proposed head tax. At first, O’Brien suggested that people text their questions to the panel, but many in the audience were prepared to speak their mind out loud — loudly.

Not much was accomplished over those 90 minutes, which KOMO News recorded in full, other than underlining how contentious these issues are in Ballard — the Old Ballard vs. New Ballard arguments are more intense than ever — and the rest of the city.

Here’s a sampling of coverage and perspectives:

KIRO 7 News: “O’Brien appeared to be surprised by the anger. ‘The tenor frankly in this country right now of whoever yells the loudest or says the most horrific thing, and that gets covered in the press, it’s really awful,’ he said. ‘I hope that attitude is not about to be here in Seattle.'”

The C is for Crank (Erica Barnett): “What I witnessed in Ballard tonight, at what was supposed to be a panel discussion, with a moderated Q&A, on a proposed business tax to pay for homeless services, was not just a crowd of angry neighbors wanting to be heard by their elected representatives. It was an organized mob that showed up with a single goal: To shut down dialogue, create chaos, and prevent people with opposing views from having a voice.”

770 Radio’s (Jason Rantz): “When you’re out of excuses for why you keep failing, and your only talking points are flat out lies, it’s no wonder O’Brien tried to shut up Seattleites from speaking at the town hall event. Thankfully, he’s fighting a losing battle.”

77 thoughts to “Ballard town hall turns into an angry shoutfest”