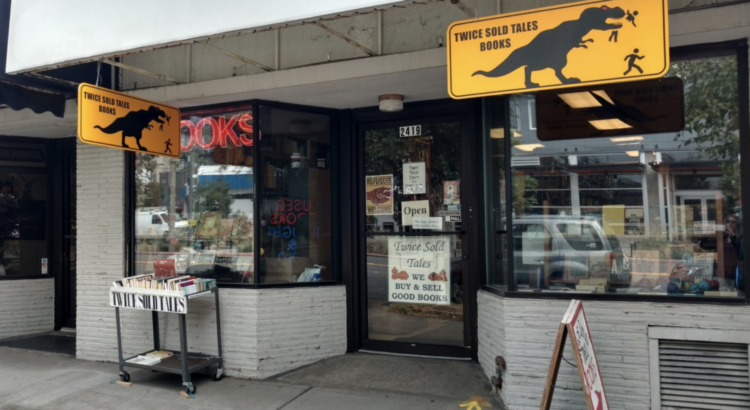 Twice Sold Tales has had quite the nomadic existence in Ballard.

The second-hand bookstore first moved to the neighborhood in 2012, when they opened next door to Bauhaus Coffee. They then moved to 2419 NW Market St in 2016, which was an upgrade — it was twice the size of their Bauhaus spot, with its own storefront.

However, a few months ago, owner John Watkins received notice that the property he rented had been sold to a developer, who plans to replace it with a 170-unit apartment building. He had hoped to stay in Ballard, and now it appears he will: he’s taking over the former Himalayan Treasure location at 1708 NW Market St, and moving in this month.

“Moving a bookstore is pretty difficult,” Watkins said, which is understandable, considering he has an inventory of 20,000 books to cart down the street. “I have some volunteers and a few paid helpers, but we’re always open to more,” he said. The new location is about two-thirds the size, though, so he’ll be offloading some books to thrift stores.

“I’m a little disappointed they’re tearing this building down; I hoped to stay here longer,” Watkins said of his current location. But, he’s optimistic: “I have some good new landlords, and it’s a decent location, I think I’ll do ok there.

“It’ll give me some stability. I hope I don’t have to move again until I retire.”

The current location (2419 NW Market St) should stay open through the end of the week, and Watkins said he hopes they’ll be ready to open at the new shop within a month.