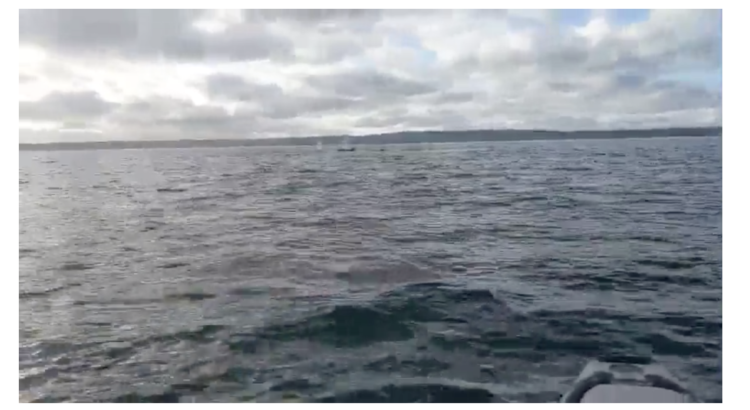 A local kayak fisherman had quite the Ballard wildlife encounter this week, when he spotted a pod of orcas just off the Ballard Locks on Monday.

Brad Hole recorded the below video, in which he watched as three whales surfaced several times, not far from his kayak.

Hole had just dropped his line into the water not far from the Locks when he heard what sounded like a whale blowing water from its spout.

“I turned around to see two orcas diving not far from me,” Hole told My Ballard. “A couple minutes later another orca came from the north and joined them.” He said the whales were surfacing near him for about 15 minutes before they headed south.

“I spend a ton of time on the water in my kayak, on fishing boats and on a ferry and have never seen an orca outside a tour I did out of Anacortes years ago,” Hole said. After he posted his video, it was picked up by the Orca Network, who told Hole they think it was a Bigg’s pod of transient orcas, known for eating seals, dolphins, and sometimes other juvenile whales. Transients travel in smaller pods, and, as the name suggests, don’t stick in any one area for very long.

“It was such an amazing experience,” Hole said. “I tried keeping my safe distance from them and there was only one other boat out there watching. In hindsight I wondered if my kayak might look like a seal or sea lion.”

You’re not one to talk

Bet they are out begging for granola and pb&j sandwiches because they’re starving!

Not orcas, just Seattle swimmers.
Healthy at any size!
Also “transient orcas”? Haha EVEN OUR WILDLIFE ARE HOBOS!