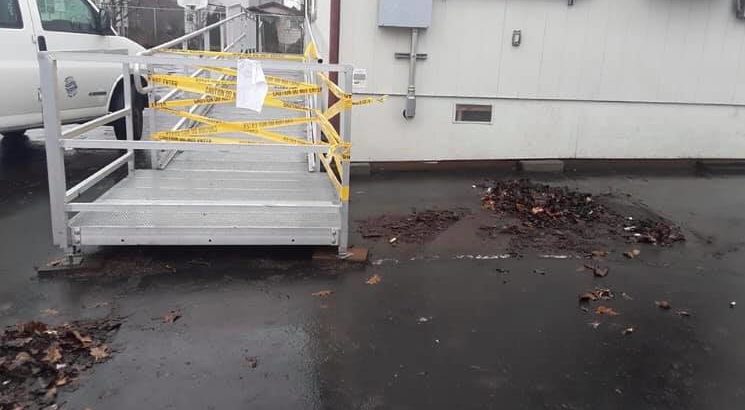 Earlier this week, someone made off with the wheelchair ramp leading up to a portable classroom at Adams Elementary School.

It happened in the middle of the night, and followed a similar theft at North Beach Elementary — one of their ramps was stolen over the holidays. 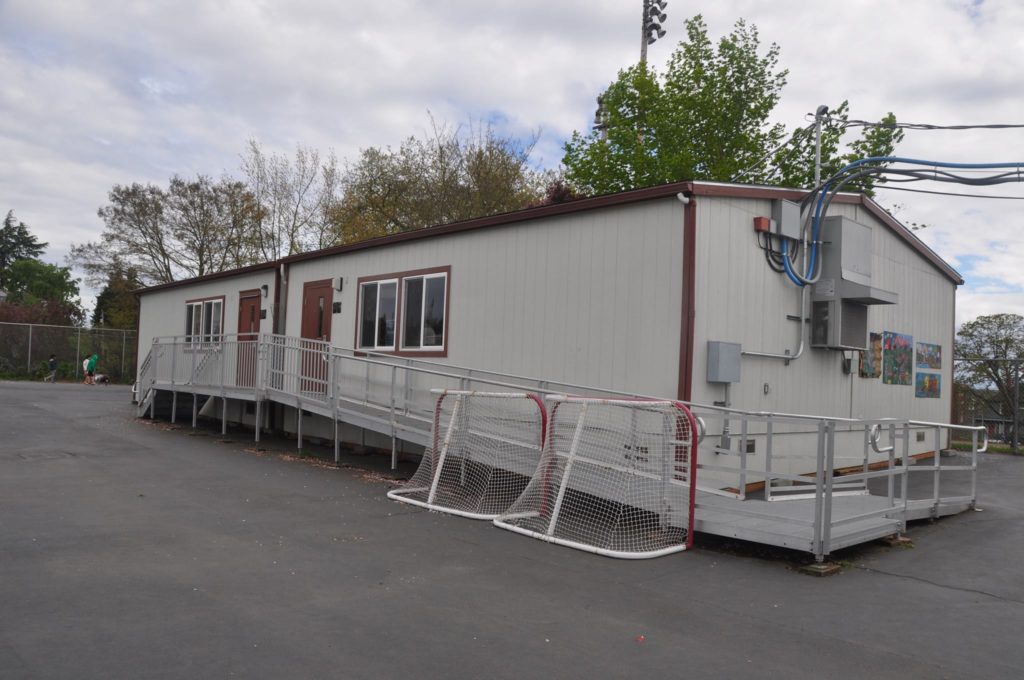 “No one has a clue,” school employee Debbie McKagan told My Ballard. “It was there on Tuesday, and Wednesday morning, it was just gone.”

A wheelchair ramp doesn’t seem an easy thing to steal — it’s at least four feet wide, and about 10 feet long (see above). My Ballard Group member Julie Peebles Hall posted about the theft in the group, after which a few people speculated that it was likely taken apart and sold as scrap metal.

McKagan said the ramp was replaced by the school district on Wednesday.

Seattle Police were notified, but with no suspects and no physical evidence, they currently have no leads.

Thanks to Julie Peebles Hall and MarieSol Chamberlain for the photos, posted in the My Ballard Group

Leads? Yeah, sure. I’ll just check with the boys down at the crime lab. They’ve got four more detectives working on the case. They’ve got us working in shifts!

what sort of scumbag steals a wheelchair ramp?

Come on down to Ballard Commons and you can meet a bunch of them!

Got any proof of that Columbo?

I highly doubt that the homeless have the ability to haul off and dismantle a large wheelchair ramp.

If you’re insinuating that homeless people are carrying off a wheelchair ramp, you’re the one who’s high.

Apparently, neither “Truth” or “fluggermutation” have ever noticed all the Pickup trucks occupied by ‘homeless’ people, illegally parked around Ballard Commons, the Leary Triangle, B-G Trail…

They see what they want to see and disregard the rest.

“No one has a clue”.
That would be a great official motto for Seattle.

LOL. Perfecto. Yet our larger issue is why do we keep selecting the same ilk of politicians again and again expecting different results? So rhetorical, yet so defining. This was done by the licensed and bonded people at “Midnite metals Inc.”. They really care there. Heroin. More heroin. Excuses. More excuses. Crime. More crime. Being progressive really sucks

“They’re making the best choices they can.”

Did he really say that? Ha ha, that’s rich. So, if one of his street-friendly Oliver-like urchins walked up and punched him in the nose, would he say that it was ‘the best choice’ they could make?

Even NYC has take notice of the Seattle City Clowncil

The current price for scrap aluminum is 28 cents a pound, if the ramp were 500 pounds, that’s a $140 bucks. Now who besides Mr. Mike’s constituents would go to all the trouble and risk for $140? Come on people, wake the F up, your over the top compassion for POS is at an all time high. What are you teaching your kids when you have to step over needles and human crap, the whole place is a toilet. Your parents and grandparents that worked so hard to give the next generations this beautiful town must be so proud of what you have accomplished.

I take the “risk” part of my statement back because as we all know, there is no risk because Mr. Mike’s people have a free pass.

Or maybe just to be fair, maybe it was a bunch of stinky fishermen that needed it for a gangway to one of their stinky, polluting, sea-raping ships.

Logic holds you’re one of these constituents.

You realize the skills, vehicles and tools needed to haul off and demolish a wheelchair ramp, right?

Ignore your weird crush on Mike O’Brien for one second, stop and think about whether a homeless person living in an RV or tent has the ability to steal, transport, demolish and sell a wheelchair ramp and have no one witness any part of that to boot.

Well aware of the “lack” of skills to take one section of the ramp as they did, a crescent wrench, pliers and a pick up truck. If you paid any attention they only made off with a section, the ramp itself. Do you really think the ivy league educated mouth breather at the scrap yard gives two shits where this came from? WTFU!

Has anybody noticed that people here are willing to SACRIFICE THE ENTIRE CITY on the altar of their liberal ideology?

I thought liberals cared about the safety of women and children, and obsessed with “safe spaces” – but they only seem interested in banning/censoring conservatives and raising taxes to give away to scumbags, ingrates, and criminals.

What in God’s name are you blathering about? This is an article about the theft of a metal wheelchair ramp and you’re rambling about liberals, safe spaces and WON’T SOMEBODY PLEASE THINK OF THE CHILDREN!

The blog is starting to get slowly contaminated by sockpuppets again. Time for the MyBallard mods to put the registration to good use and start weeding them out.

And there’s Truth right here to, quite expertly, PROVE MY POINT. Pathetic.

And there’s Truth right here to, quite expertly, PROVE MY POINT. Pathetic.

Again, what point is it that you’re trying to make? Read your original post out loud to yourself. If you still see nothing wrong with it, immediately drive to the nearest mental health center and check yourself in.

I wonder if the money from scrapping it went to drugs?