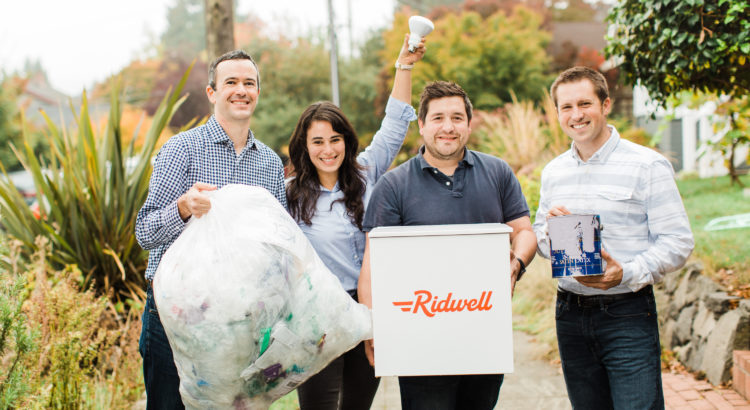 Almost exactly a year ago, we shared a story about a father and son duo that started a recycling pick-up service, called Owen’s List, for the neighborhoods around Ballard. Their list of pick-ups grew quickly, to the point that they’ve expanded and officially started a business called Ridwell.

“It started as a father and son project to get rid of our own things the right way. And then we shared with our neighbors, and they shared with their neighbors, and it spread to the whole city. It’s turned into something much greater,” Ridwell co-founder Ryan Metzger told My Ballard. 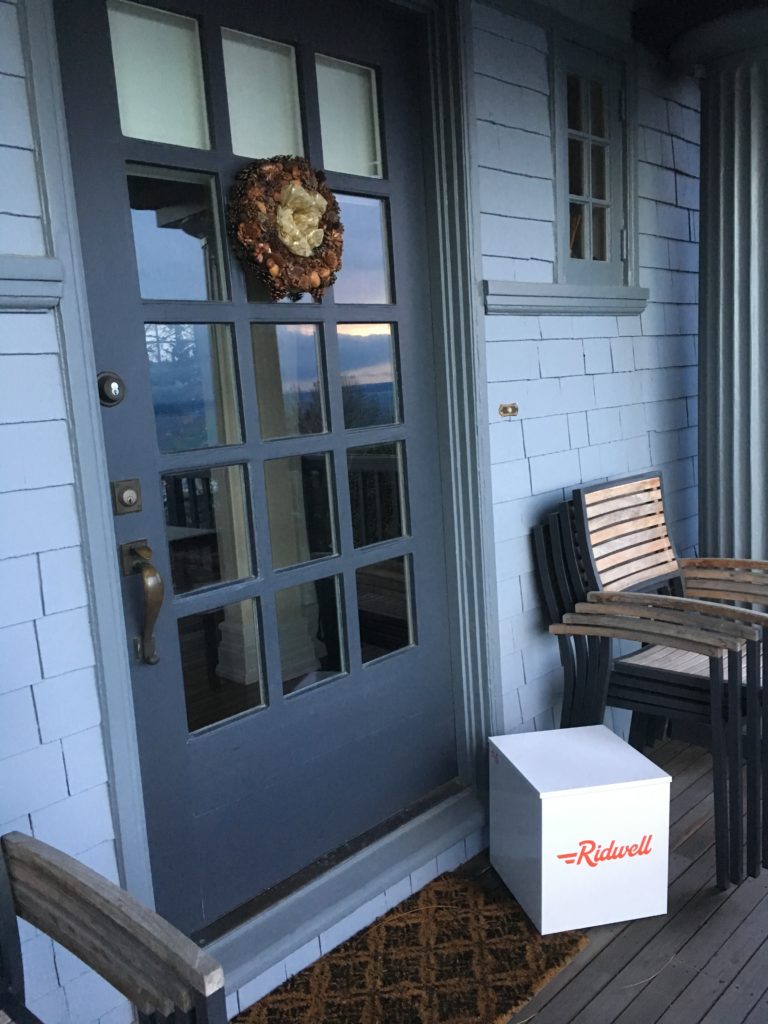 When they started, they’d pick a zip code and one type of recycling category — holiday lights, for example. They’d drive around and pick up items from those who signed up, and then take the whole load to be recycled.

“But then we’d get all these questions from people: ‘I have styrofoam, when’s your next pick-up for that?'” Metzger said he and a few friends decided there was opportunity to move beyond Owen’s List and offer consistent pickups with more recycling categories.

With that in mind, Ridwell was born. 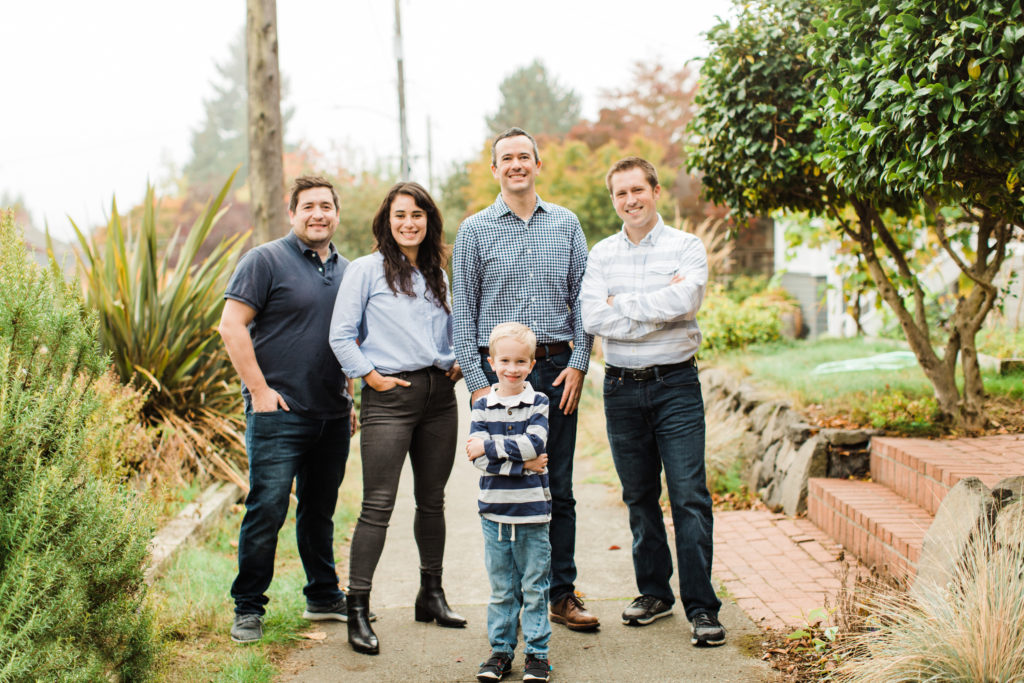 Ridwell is a subscription service: for $10-14 a month, customers receive a white bin, and the company will pick up five categories of recyclables every two weeks. Four of the categories are constant — plastic film (think plastic bags), clothing and shoes, batteries and lightbulbs — and the fifth is a rotating category.

“This is one where we hope to inspire people, because a lot of them are things that help the community,” Metzger explained. For example, they once made the fifth category leftover Halloween candy, benefitting Birthday Dreams, a group that plans birthday parties for homeless kids. Another time, they took winter coats for Mary’s Place and Westside Baby. They’ve even picked up food takeout extras for the food bank. They’ll also rotate in other household waste, such as styrofoam, electronics, and latex paint.

The Ridwell team has made an effort to partner with local organizations for most of their donations. The plastic film they pick up is turned into Trex, a deck-building material. The rotating category is often donated to nonprofits, depending on the items.

“We try to find local partners where possible,” he said. 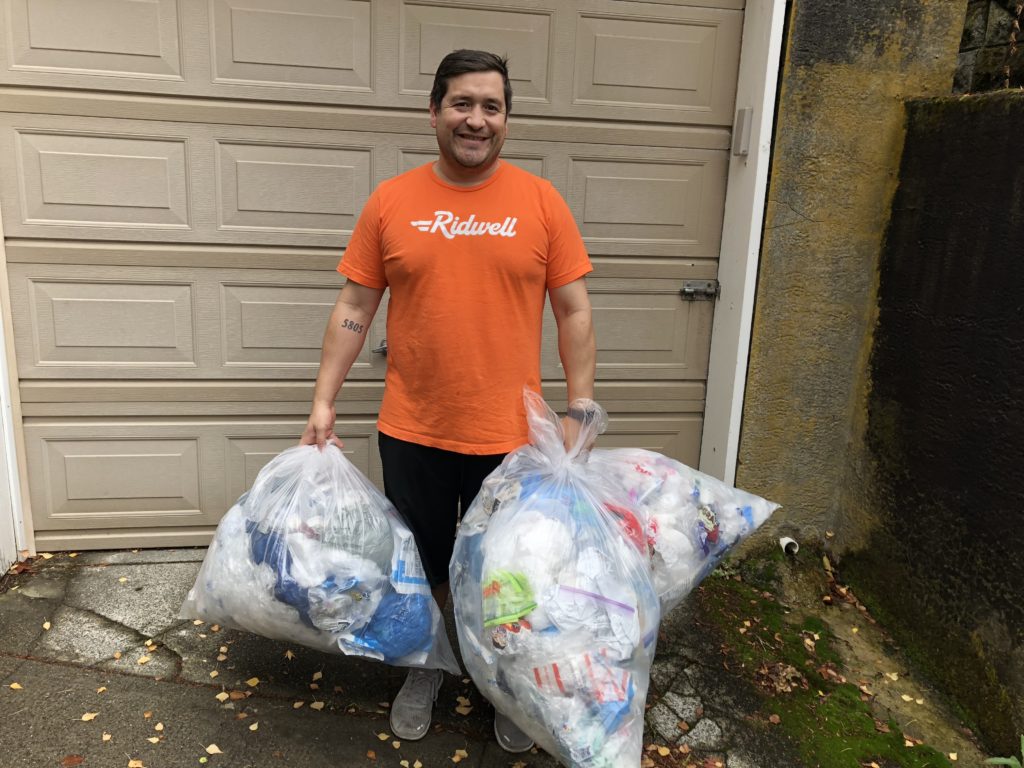 Right now, they offer the service to about half of Seattle — as far south as Capitol Hill, and as far north as Maple Leaf. With over 350 customers, they’re planning to expand to West Seattle and south Seattle neighborhoods by the end of March.

Metzger and his other three co-founders use regular cars to do the pick-ups, which he said works because they aim for manageable loads.

“We found we can use normal cars, and go home-to-home, pick up the bins and bring them back. We aggregate categories together and then take that category to a partner,” Metzger said. Customers are also given bags for the different categories, to make it easier to sort.

Their pick-ups are on weekdays, so unfortunately, Metzger’s son Owen doesn’t get to join too often anymore.

“But if Owen has a day off school, he jumps in for the pick-ups, just for old time’s sake.”

Seattle is certainly obsessed with trash and waste, so much so that we let our little pet trash monster junkie hobos throw it everywhere and design apps to pick up fancy trash that we feel some guilt over.

Fun fact: all that Amazon stuff is made in awful factories and ends up in the trash and then the oceans.

Even on an article about recycling, you can’t help but shout to the world about your strange homeless fetish. Nice work Harley Lever!

Nope. My post was more about the cognitive dissonance epidemic among Seattle’s “green” techies. In fact, you’re a pretty great specimen.

Ooh, you called someone a “green techie.” Nobody but a MAGA would be offended by that. Nice try amateur.

I use it and love it. Saves me a lot of trips to the Haz Mat place or Lowe’s or whatnot to properly dispose of batteries, lightbulbs etc. I def recommend giving them a try.