With near-apocalyptic predictions for viadoom, it seems many in North Seattle have taken to two wheels for their alternate commute during the viaduct closure: on the Monday commute last week, nearly 4,000 bicyclists crossed the Fremont Bridge.

The Seattle Department of Transportation just released statistics from the first week of the viaduct shutdown, and bike commuting has spiked as people seem to be avoiding driving at all.

In a bike count from Saturday, Jan. 12 to Wednesday, Jan. 16, SDOT found a big rise in the number of riders who used the Fremont Bridge compared to the same week last year. (they note that last year’s Monday fell on Martin Luther King Jr Day). 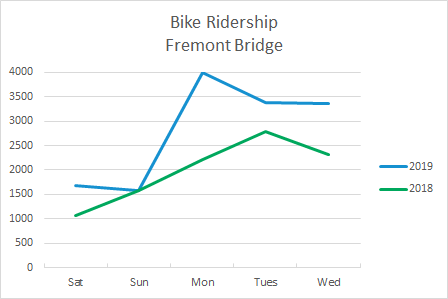 As it turns out, many people didn’t see a big difference in their commute during the first week of the “Seattle Squeeze”. However, those traveling into the city from West Seattle and from the south seem to be experiencing the worst of it.

How has your commute been affected by the viaduct closure? Email us your stories at tips@myballard.com.

Reminder: keep your bike locked up and don’t leave unattended for long periods or it may become part of the O’Brien Junkie Fleet.

and that nonsense is based on what?

Gordito – U.B. does have a point. Locking your bike up and locking you car is a good idea in Ballard.

Actually… you are better off not lock the car and take any valuables with you, could save you from a smashed window. I have even seen signs on the dash boards asking to not break the window cause nothing of value is inside.

Now before you all start telling me that I’m hysterical and have nothing to back it up. I have pics of the aftermath of locked vehicles in Ballard. Not trying to start crap, just the facts.

Question: Is Mike O’B a Vice Admiral or a Rear Admiral in the Junkie Fleet?