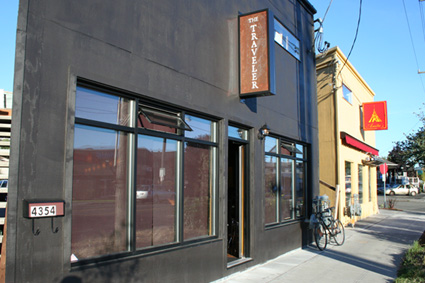 An upscale gastro pub will soon be opening in the space where The Leary Traveler (4354 Leary Way NW) recently vacated.

S/T Hooligans will be a pub with upscale food and counter service, owner/chef Rodel Borromeo tells My Ballard. This is Borromeo’s first solo venture, but he’s no stranger to the industry — he helped open several Matador restaurants, the Social Bar and Grill in Tacoma, and Woodblock in Redmond.

“I’ve been doing this awhile,” Borromeo said, “but this is the first one on my own. It’s going to be fun.”

He’s currently working to renovate and clean up the space. The biggest change will be to the bar and kitchen — he said he wants to expand the kitchen into the bar area for more cooking space. The food will be Creole/French, with upscale pastas, burgers, sandwiches, and oxtail on the menu. Borromeo said they’ll start with serving dinner, and will expand to include lunch and weekend brunch.

Borromeo chose the name Hooligans because he said it reflects “having a different, hooligan mentality” about the restaurant industry.

“We’re going to be doing things a little differently,” he said, when it comes to front-of-house/back-of-house delegation. They’ll focus on hiring people with strong kitchen experience. “I like the camaraderie of the back-of-house, with everyone working together.”

Hooligans will have walk-up counter service. “It will be a little stripped down, but the food is going to be elevated. It also makes it more affordable.”

Borromeo hopes to open by the end of March — we’ll update on their official opening when we know more.

So, went to Hooligans last evening for food and drink. Eagerly awaited their opening because the Leary Traveler was my go-to bar for awesome cocktails, good bar food and a rousing board game with friends. Hooligans has been open for 3 days so far and clearly need a lot of work to be done to be ready for prime time. There is a clear disconnect between what they describe in the interview posted above my comment and the offering currently available. First and foremost-they should hire a skilled bartender and get their bar fully stocked and up and running. Booze is the money maker-get it going ASAP. When I went, they had some bottles remaining from the Traveler but were not able to make a cocktail. Beer varieties were good but nothing special. Ordered a brisket sandwich and some fried brussels Sprouts. The food was decent-nothing special unfortunately and also served like I was eating at a cafeteria-with disposable plates and plastic forks. Not particularly appealing and compelling. The owner and his team were super friendly and very accommodating. They talked about plans to make their own ginger beer and expand the food menu beyond the basics offered currently. I… Read more »