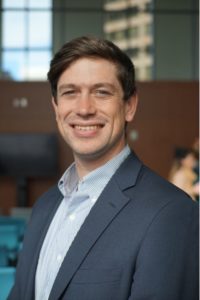 Yet another candidate has entered the race to represent District 6 on city council: Ballardite Dan Strauss announced his campaign just minutes after Mike O’Brien said he won’t be running for re-election.

Strauss, who currently works as policy advisor to Councilmember Sally Bagshaw, has been working in Washington politics for awhile: prior to his work with the city, he also served as an aide to State Senator David Frockt and worked with the Alliance for Gun Responsibility.

His campaign website appears to be under construction, but on his homepage is this bio:

I was born and raised in Ballard, the son of two social workers with a combined income of $95,000. Our neighbors were school teachers, welders, plumbers, electricians, and fishermen. As our city changes, we need to work together to achieve solutions that preserve our community and promote our economy.

He goes on to appeal to District 6 residents, “I want to hear from you, to build a platform that works for all of us.

“I know that the policy decisions we make in any legislative body have deeply personal impacts on our constituents. I know how to move power back to everyday people and make sure their voice is heard. That’s what I intend to do for our district.”

Ah good. The progeny of TWO SOCIAL WORKERS and Bagshaw advisor. AWESOME!
Wonder how many junkie criminals he has camping in his yard?
None? YEP
This guy, sadly, is PERFECT for the Cat Moms and their betas.

Still waiting for Harley “Uncle Buck” Lever to throw his hat in the ring and run another “successful” political campaign.

Don’t let us down!

Seems odd that you are pointing out someone failing last election, when your guy isn’t even running because he’s so unpopular.

First of all, my guy? What’s that supposed to mean? I don’t believe I have ever declared or even decided my voting intentions for the 2019 District 6 Council primary or final elections. He’s currently my representative councilmember, if that’s what you mean. That would also mean he’s “your guy” too, right comrade?

Secondly, don’t know where you got that he isn’t running because he’s “unpopular” (in your words):

Speaking to reporters Wednesday in his council office, O’Brien, elected three times, said he could have won another contest and agonized about whether to try.

I’m curious: when you spew all your easily debunked, fake comments, do you do so purposefully or are you actually that ignorant? I know I’m never supposed underestimate the power of human stupidity, but yeesh!

At least the real elenchos posted facts and articles to backup their comments.

Haha, he did an internal poll and got really bad numbers. So your source that didn’t happen is Mike O’Brien?

I’m just quoting his press conference where he announced that he isn’t going to run. You are speculating based on leaked, unverified information.

If I’m incorrect and he’s officially given informal polling results as his reason, feel free to point me to an article that says so.

” a combined income of $95,000.”!!!
That puts them squarely in the top 2% of Ballardites.
I wonder if the family has signed up for the Gates Foundation’s giving pledge?

This guy virtue signals so hard even his unborn grandchildren are self haters.

OK, fine then, Perhaps we then should consider electing bums and heroin addicts to office and make more here happy? I’m just looking for a level headed person who treats our hard earned $$ like it’s their own and isn’t a protégé of Sawant, Bagshaw + MOB. Is this too much to ask? Are there no freaking right thinkers at all here? Hmmm, now there IS some “diversity”, Seattle style. Do it my way or else. So who ARE the true bullies here?

I guess I will have to wait a spell before we hear about somebody with a pro-cops platform, a PRO-small business person, a constitutionalist, and not just another theoretician/book smart person with feelings who will change squat. No libertarians out there? Just the same old tired schtick? Ballard residents have been conditioned. As in the “soft bigotry of low expectations”. Think about that folks and let that settle in for a minute and then react.

This District is probably 90% Democrats. There is grat agreement on the need for mental health programs, drug rehab programs, job programs. How about a council member who takes what we agree upon and works with the possible, rather than a council member (like O’Brien) who scorns consensus because it’s not “progressive” enough? Is that too much to ask?