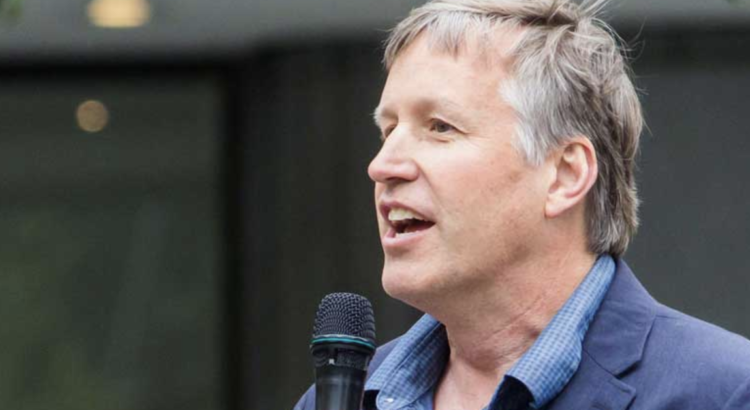 The longstanding District 6 representative has been in city council for about a decade, first elected in 2009. He becomes the fourth incumbent who plans to step down from city council — Rob Johnson, Sally Bagshaw, and Bruce Harrell have all announced their departure from office.

O’Brien’s work on city council has been considerable: he helped ban plastic bags in Seattle, worked to create the democracy voucher system, and worked to find housing situations for the homeless, including the former encampment on Market St.

However, O’Brien’s reputation in Ballard has been a mixed bag. He’s been criticized for his approaches to homelessness and his support of the city’s head tax. And just last May, he was shoved out of a party celebrating the Nordic Museum opening. Not long before that, he hosted a town hall meeting that erupted in an angry shoutfest.

As the Seattle Times reports, his resignation marks “the end of an era” — next year, the council will include no one elected earlier than 2013.

Three other candidates have so far announced their campaigns for District 6: Kate Martin, Jon Lisbin, and Jay Fathi.

“O’Brien’s work on city council has been considerable: he helped ban plastic bags in Seattle, worked to create the democracy voucher system, and worked to find housing situations for the homeless”

I’ll just let that soak in a for while.

oh, i think your tiny brain must hurt from thinking too hard. i’ve called you out for being a troll a few times in the past, since you only come onto this neighborhood website to bitch about homeless and the crazy liberals. your alt elenchos2 got panties twisted and made it a mission to then call me a troll on a bunch of my posts. now i called out elenchos for doing precisely what you do (hench the alt comment) and lo and behold, you misunderstood. it’s perplexing how you can be so dense.

“elenchos2 got panties twisted”
What is this gay/woman shaming? Pathetic liberal bigotry.
You guys act all upset about fake racism but insult people with size-ist, sexist, age-ist nonsense. Grow up

“What is this gay/woman shaming?”
Nope. Try again friend. Nice assumption though. Anyone can wear undergarments they wish. I was calling out elenchos2 for getting panties twisted. Are you saying only women and gay people can wear panties? Nice hypocrisy.

Maybe Uncle Bucky can brush off the cheeto dust and leave the basement and finally show us all how government should be run.

ha! we’ll see if lil bucky is capable of finding something to complain about once his arch nemesis is no longer in office. odds are he’ll still be incoherently rambling about the same things.

Makes sense that you know that lil bucky.

Well, Michelle Obama said as much. You really need to work on your angle here, because the cat fur is giving me allergies.

You obviously really need to work on your IQ, and trolling skills.

How many years will it take to repair the damage in Ballard this boob has initiated and caused?
Hopefully, Sara Nelson will run and finally we will have someone to represent the people and businesses of Ballard and someone on our council who actually will bring some common sense to the table.

“common sense” = finding housing for the homeless and increasing taxes to adequately provide mental health care for everyone?

Why don’t YOU start by simply sending the local and federal governments more of YOUR money and leave the rest of us alone? After doing this YOU can take full responsibility for MOB and his antics, and then begin the clean-up. I guess you missed the information on the BILLION spent so far on said homeless? Perhaps listening to Dory Monson would help you with a few statistics; such as the raw numbers of $100K per homeless already being spent. We can soon put YOUR name on these stupid wet houses too, where people go TO drink and drug. Your incessant rants are a clue you don’t have 1.

Maybe you should try listing to less of his trash show and watch as your outlook on life improves!

Are you here to mansplain to us about how the city council is very popular and will win again in a landslide?

You are being mansplained and every day by listening to Dori.

@Paintking
We all know the answer to this: they use taxation and regulations as punitive measures against their ideological enemies. It has little to do with how much “help” is done. It is more important to “send a message” then to fix anything. This is why they import voters illegally and tolerate and encourage antisocial, destructive behavior among their entitlement vassals (welfare etc) to keep the whole thing grinding along. You Bigot.

ha….what? we’re talking common sense, and you bring up dory monson? LOL get a clue

Umm, MOB did represent many area residents; the uber-liberal and out of touch residents who’s taxes skyrocketed, who’s homes + businesses were broken into, who’s streets had campers, who’s kids found needles, etc, etc. He did represent the liberals fantasy/dream, and it FAILED miserably. So, are we now going to simply re-arrange the deck chairs here or actually install a visionary with a clue that has perhaps even run something beside his mouth and a campaign, or rinse, lather, repeat? AOC is MOB on steroids too.

Hoping for some centrist candidates who value the homeowners and renters of Ballard and Fremont.

centrist – do you mean someone who does nothing to fix the problem but instead hides it for a period of time while it gets worse?

COOL. didn’t think you’d be smart enough to understand you should explain yourself if that’s not what you meant.

No, that’s the O’Brien approach. Except for the “hiding”, which he hasn’t done well. His legacy is visible everywhere in Ballard, alas.

What was it Donna Fargo once sang?

O’Brien’s withdrawal increases the odds of a testicle-free City Council next year. All three male incumbents have pulled out!

Will he be less responsive to his constituents now? Is that possible?

Future is female!
Seattle is clearly a shining example of female leadership.

Mike O’Brien in pilot suit, standing on the flight deck of an aircraft carrier filled with junkie hobos amid burning piles of tax dollars, a spray painted banner above reads “Mission Accomplished”.

Can’t wait for another four years of our favorite delusional sockpuppet blog troll complaining our next District 6 councilmember!

Mikey can stand tall and proud and declaim to anyone who might still want to listen to him-
“I came,
I saw
and I screwed the pooch!”

Is Mikey ‘making the best choices’ he can? Kinda sounds like it.

Why? so sad. real estate developer