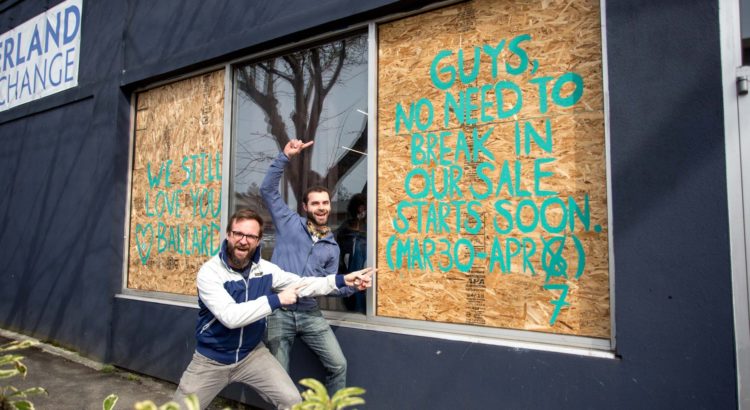 It’s been a tough week for Wonderland Gear Exchange — they just had another break-in over the weekend.

The first one was the weekend before, when burglars smashed a window and stole a number of items from the store.

“Fortunately this time they were scared away before they could steal anything. They tried to break the door down before smashing another window in,” co-owner Ben Mawhinney tells My Ballard. “Our upgraded security system seemed to do the trick.”

Despite the set-back, Mawhinney and co-owner Nate Seiberling are making light of it on social media, posting the above photo to let their customers know.

“Guys, no need to break in, our sale starts soon” they wrote on plywood they put up to cover the broken window.

If you want to support the gear shop, they just ask that you check out their end-of-season sale happening the first week of April (March 30 – April 7).

I’m sure Councilmember Mike O’Brien will come to his constituents’ assistance to insist that patrols of the area pick up and that we do more to help our small businesses thrive.

They need bars or roll down doors on their store like in economically oppressed inner cities neighborhoods.

““Guys, no need to break in, our sale starts soon” they wrote on plywood they put up to cover the broken window.”

OK, I get it, showing anger over crime is not what’s done in the Seattle of 2019 but that is just silly. The perps don’t want to even pay sale prices; they want someone else’s stuff for free!

Who did this? “likely someone who needs it badly enough” – some virtue signaler who will probably remain silent on this break-in the second time around.
I’m not even their client base, but I’m still going to go in and take a look around, and try to buy something from them.

Nobody has said anything close to that on this page except you.

Truth did some junkie camper steal your snark last week? Because your game is off – even by the weak standards we come to expect from you.

I’m so sorry this has happened again but I love the attitude they are putting out.

Pretty much the attitude of the city. Just brush it off and pretend it’s no big deal.

They could let it break them and be bitter or they can do as they did, upgrade their security system and use the incident to show that they are strong, positive people who will carry on.

You could do with taking a little inspiration from happy, well adjusted people. You wear your misery like a badge of honor but no one is impressed.

Oh man, this is sooooo funny. Stand up material for late night no doubt, right? I’m certain these criminals will use their free stuff to help the children or senior citizens. I’m, certain they are good people too. In fact, they should simply camp in the folks front yards who have those “we welcome everybody” signs. Perhaps those fine folks can take them all in then soon too.

“Will trade junkies, criminals, and rapists for rednecks”

This is really how they think, tbh

You know the Lenin state is IS NOT IRONIC anymore, right?

For those of you who can’t understand why these guys are playing this with “humor”, understand that in Seattle 2019 one must “be above” getting angry about crime or antisocial behavior. White liberals in the Trump era in Seattle must show they are tolerant even in the face of unbelievably stupid policies and inept/corrupt city leadership. All criminals are just “victims of capitalism” and “aw shucks you guys please don’t steal we’re the GOOD white guys we want open borders and weak cops!”.

So if you get ripped off TWICE just make your best soyboy duckface and post your sob story on Instagram for the likes and feels. Keep on cuckin’, Seattle!