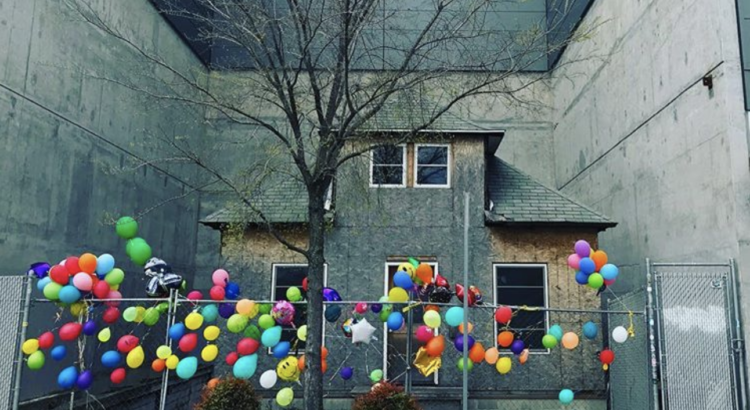 The story of Edith Macefield has been covered in international media before, but this time, the story has been told as a radio drama, produced by the BBC.

“I was walking in East London and noticed a building – Wickhams Department Store (picture below) – with what appeared to be a building within it,” Thurman tells My Ballard. “I googled it and, as well as finding out that the owners of a small shop refused to make way for the huge department store, came across a number of other stories of ‘property holdouts’. Edith’s in particular immediately sparked my imagination.”

While the house doesn’t look like much at present, it’s not going anywhere anytime soon: Ballard Blocks developer Regency Centers told My Ballard last year that they’re keeping the house.

Regency managing director Craig Ramey said they may tie it into Ballard Blocks II, which is still in development across the street.

Here’s the link to the audio story — enjoy!

Yeah, it really looks great and adds a ton of greatness to the area. If this is what resistance appears as, I want none of it. What the hell was accomplished here? An eyesore is all there is, and was. But some people felt so good and got all worked up, and that’s all the really counts today. A metaphor for many.

Edith Macefield chose to live out her days in her own home at her own expense, lawfully and depriving nobody else of their rights as she exercised hers. That is fundamental to our rights as free people and as Americans.

Elsewhere, as in my native state of Connecticut, developers could persuade local government to seize her property for commercial development. Unfortunately the U.S. Supreme Court facilitated this taking. Subsequent outrage reduced but has not eliminated the risk.

It’s not a minor matter. Usually these takings victimize the poor and minorities. Eternal vigilance (not snide condescension) is the price of liberty!

Paintking – I suspect that you do not understand what this was all about.

Wow, please stop your mansplaining and check your privilege. You do not get to decide how the world works.

As usual, elenchos2, your comment makes no sense and just shows your mental confusion. Facts are facts even if they rub you the wrong way as most everything does.

This is not about facts, but rather upholding as a martyr a woman who said some very heinous things.

She is revered for her steadfast refusal to be removed from her home. I don’t know what you think she said but I doubt it was more heinous than your comments about local school children or many other topics. You really are not in a position to judge anyone for saying “heinous things.”

“This is not about facts…”

So why do you take umbrage with someone stating the facts? It’s as if your train of thought derailed before it left the station.

Listened to the radio play at lunch, thank you My Ballard, for sharing this. I love Edith Macefield and the legend she has become.

It’s really hard to get respect someone that made comments like the ones she made back in the day.

That is exactly how I feel about you.

We don’t respect you for comments that you make now.

FWIW – this radio play is really worth listening to. It is a look into a life that many will empathize with. People have amazing stories that never get told. Edith had some stories, we will never know if they were all true but that does not matter because what really happened was a person wanted to live in a home that she felt safe and comfortable in and wanted to end her days there, then a development of the neighborhood tried to change that and she resisted. Amazing woman! I applaud her and wish that something could be done with the property that would be a fitting memorial to her.
I have to admit that I pass the house often and don’t notice it and forget it is even there.
I thoroughly enjoyed the BBC play.