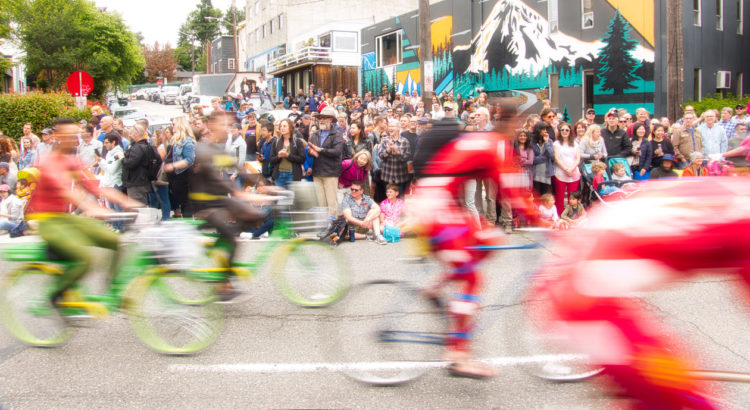 It was the perfect Seattle summer day — overcast with a hint of chill in the air.

However, the grey skies didn’t stop locals from turning out by the thousands for the annual Solstice Parade, sponsored by the Fremont Art Council to celebrate the longest day through, “profound street theater, public spectacle, and a kaleidoscope of joyous human expressions.”

Well before the start of the parade, some 600 cyclists gathered at CSR Marina for the annual rite of body painting.

In the art of body painting, strangers quickly become friends.

Alex Malone met Jason Benhalm in the hangar and offered to put the final touches on his costume.

“I’ve been wanting to do this since I moved to Seattle,” Benhalm says.  “None of our friends wanted to join us – we just met.” Malone, also a first-time rider, said he was joyful about being naked in a space that is not sexualized.

Cyclist Claire Petersky thought long and hard about her costume, inspired by a character on  RuPaul’s Drag Race. “Riding naked is easy – it’s harder to come up with an artistic concept.”

The cyclists led the way at the front of the parade after the Fremont Arts Council reversed an earlier decision to place the cyclists at the back of the pack. Unlike previous years, they were not permitted to loop around the entire parade.

“We were very disappointed,” says organizer Jordi Neth. “We loop around the parade to keep the parade together and the route clear.”

Neth says many people come to see the cyclists and not allowing them to loop around restricts people from seeing them all. “We are hoping this will be the only year we don’t loop,” he said.

More than 60 organizations marched in the annual parade, which concluded at Gas Works Park with a party that featured artwork, food and bands that played into the night. The festival continued on Sunday with a craft market and dog parade.