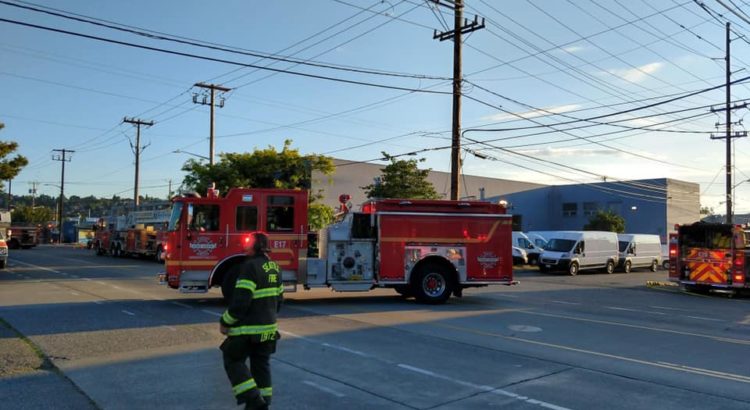 Update 11am: David Cuerpo from Seattle Fire says the fire started when one of the LimeBike battery packs ignited and caused other packs to catch fire. The sprinkler system activated and contained the fire within the room.

The Vault Response Team was activated when the crews found high voltage signage; water from sprinklers mixed with battery acid can conduct electricity and pose a risk to firefighters.

Cuerpo says they requested Seattle City Light to de-energize the building while crews shut off the sprinkler system, allowing the vault team to use dry chemical extinguishers onto the fire.

When the fire was put out, the batteries were removed to a safe outdoor area in case they reignited.

Original 10am: Two electrical fires broke out at the LimeBike warehouse in Ballard last night.

Seattle Fire first responded at 7pm, and posted on Twitter that the fire was contained to one room of the warehouse at 4615 8th Ave NW.

By 9pm, they’d put out the initial fire, but then at midnight, crews were back on the scene because the fire had reignited. Lauri Miller posted an update in the My Ballard Group shortly after, saying Seattle Fire was planning to use dry chemicals to put out the fires.

A representative for LimeBike says they’re working with the Seattle Fire Department to find out the root cause of the fire.

Seattle Fire hasn’t yet responded to My Ballard’s calls — we’ll update with any new information on the cause of the fire.

Sorry to hear that but given they’ve drastically reduced the number of cars and bikes outside of the central core of Old Ballard, maybe it’s time for a new warehouse location.

Thanks for that video

Eventually my theory will be accepted as fact, given 80 years or so. For now, we suffer, but you can go knowing: The lithium batteries are made in Korea. Flight to Seattle for exploding batteries over Alaska happened to be at high auroral Ap (there was a CME from the sun a few days before). Now for the settled science … Lithium Ion batteries are agitated by radiation which is far higher with increased elevation and higher during auroras the closer the exposure is to the auroral ring around earth’s magnetic pole (east of Barrow Alaska and granted all the way over to north of Lake Superior) The aurora can cover a lot of territory, that entire area). To reduce battery explosion incidences (and mere swelling, which some of you may have seen, as I have), Lithium battery delivery flights should stay southward and fly at lower-than-service-ceiling of 43,000 feet. Weigh the cost-benefit of more like 27,000 to 32,000 feet max. Flying south of Alaska is a longer route, more costly, but is it worth it? Run a test measuring radiation when Ap is high, normal vs alternate routes, using two batteries that came off the factory floor next to… Read more »

Must be fun to have a theory which will be accepted as fact in 80 years or so. Zero accountability, indistinguishable from a considered guess.
See you in 2099?!?

greenest of the green companies. lithium batteries too…