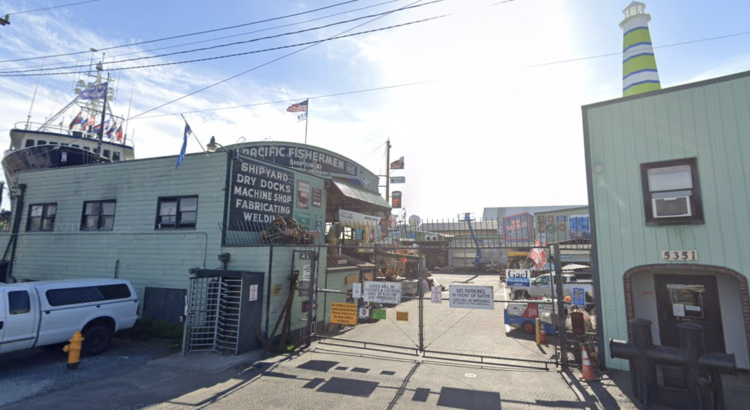 Update 3pm: Dan Katzer from the King County Prosecuting Attorney’s Office says the court released her on her own personal recognizant at her first appearance. He added that the case had not yet been submitted to the prosecutor’s office for a filing decision.

Original: A woman was caught attempting to steal a fishing vessel from Pacific Fishermen Shipyard in Ballard earlier this month.

According to a report from MyNorthwest, the woman grabbed a hardhat from a nearby construction site and entered the shipyard unnoticed. It wasn’t until workers heard the diesel engines turn over that they realized something was wrong.

General manager of the shipyard Doug Dixon told MyNorthwest that the woman was attempting to steal a 123-foot, 400-ton fishing vessel named North Sea worth $12 million.

There were workers on board the vessel at the time, working in the engine room. When they heard the engine roar to life, they ran upstairs and chased the woman off the ship.

Police reportedly arrested the woman on two felonies, but she was released 24 hours later.

My Ballard has requested more information from the King County Prosecutor’s Office regarding the case — we’ll update with any new information.

Catch and release, over and over. Is anyone else wondering what Satterberg and Holmes are actually thinking?

She was attempting to navigate to her new homeland. She was in the process of stealing a boat to motor away to the new homeless paradise of Hobo Island.

Thinking? They are part of the problem. State AG is a tool as well.

Maximizing crime & mayhem to maximize fear to maximize votes for higher taxes to supposedly address it.
Control of those taxes–with clearly no accountability–are the path for these people in their lust for power to presumably elevate themselves by pushing the rest of us down.
In crime they trust.

OMG, you must be a FOX person and a right winger lunatic. We simply can’t have opinions such as these here. You are spot freaking on! Funny how we just don’t hear too much about the BILLION spent so far addressing local “homeless issues”. Same with national politics, where all “d” candidates running for POTUS want to give illegals free health care, on the backs of working American’s. HUH? Is this a Twilight Zone episode? Hypnotized drones.

It’s recognizance that you want, not recognizant.

And people wonder why crime in Seattle is increasing every day ! We need new Judges that will punish criminals not just put them back on the streets to continue to break the law over and over again !

Seems like several commenters is assuming she is homeless based on a quote in the original article “she appeared to be homeless”. And maybe the boatyard should step up their security if someone can put a hard hat on and nearly drive off with a 400 ton boat! McDonald’s has better security!