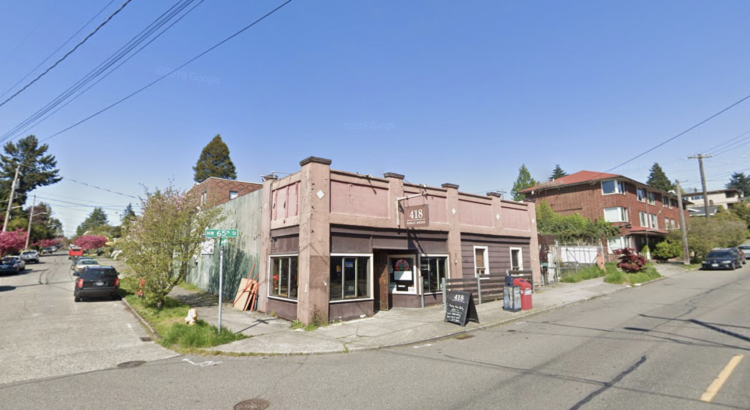 A 3-story apartment building is in the works for the property where 418 Public House operates on NW 65th St.

The site, which is listed as 412 NW 65th St, encompasses the pub and surrounding parking lot. The property sold in 2016 for $1.15 million, but the new owners honored the pub’s lease, which still had several years on it according to a Seattle Eater report.

The apartment building plans include nine units with three live-work units and general sales and service. Parking for nine vehicles is proposed.

The Seattle Department of Construction and Inspections has released their analysis and decision on the design based on public comment and an environmental review — here’s the .pdf.

The architects are SHW — click here to see their current design for the development.

We’ve reached out to 418 Public House to hear about their future plans, and will update when we learn more.

Hoorah. More people. We really need more people here. More chaos and waiting 10 minutes to make it through an intersection. Can’t fix or spend our way out of stupid. So glad I’ve lived here for 61 years and have seen this area BEFORE it turned into SF North. When complete, this will no longer be “Seattle”. Sad.

Another delusional boomer yells at cloud.

Classic snarky millennial, why is the boomer delusional? Do you mean disillusioned? It’s true the city is nothing like what is was before it became a destination. And Paintking, change is inevitable. This will always be Seattle. Wonder what Chief Si’ahl would say about what happened before his eyes. Seems like he might have more of a gripe.

418 is a great spot. Amazing inexpensive tacos, killer, just north of dive bar status ambiance and pin ball. It was pretty sweet as the Reading Gaol too. It will be missed like all the old buildings with character. Luckily condos and apartments have a ton of character to replace it. Shame they couldn’t build on the underutilized properties on the south side of 65th instead.

So buy the property and save it then, or do private property rights only start on your doorstep?

Can anyone tell me what the definition of a “live-work unit” is and how it differs from an apartment?
Thank you!

In my building the live/work units are sidewalk adjacent and are open and big and can function as an office or a residence (but some use it as both). Whereas you really couldn’t run a business (with cubicles or whatnot) out of an apartment.

I’ve seen business as diverse as a law firm or a custom canoe company operate out of them.

I’m tired of the live-work units. I haven’t seem them utilized well. If someone can point me to good examples in Ballard I’d love to see that. I think on commercial corridors instead we should have mandated ground floor retail.

It is cool that I live in Vegas now and get news of Ballard…..I show my friends and they can’t believe you people actually exist and thought it’s some kind of ” Portlandia ” script on HBO ha ha…..Happy Days Ballard and won’t miss you !

And yet you seem to be following our news bulletins closely. I think you’re jealous you’ve left the vibrant mini-metropolis of Ballard for boring, blocky Vegas.