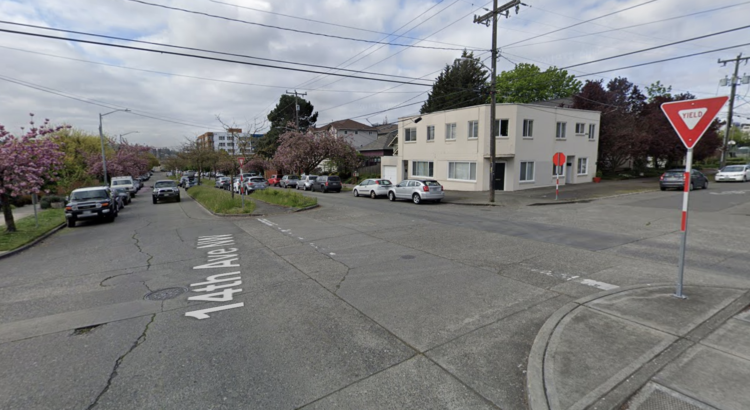 Driving down 14th Ave NW is set to become a bit safer: SDOT is planning on repainting the street markings next month.

Dawn Hemminger from the East Ballard Community Association noticed some white painted lines at intersections on 14th Ave NW both north and south of Market St, and reached out SDOT for more information.

Oli Frenchowicz, an SDOT civil engineer, said the markings are scheduled to be painted in September, weather permitting.

First, a contractor will start the new yellow line markings, with SDOT following up with additional markings soon after.

“The goal of the 14th Ave NW project was to better organize the vehicles at the intersections for improved operations, formalize the pedestrian crossing spaces, and improve visibility for pedestrians, vehicles, and cyclists operating along the corridor,” Frenchowicz told Dawn.

SDOT is also doing some sign work to reinforce new parking restrictions which is intended to accommodate larger vehicle turning movements at intersections along 14th.

Dawn requested that a crosswalk be painted on 14th across NW 59th St at the south end of Gemenskap Park, which was part of the original park design — Frenchowicz said they would add it to their project.

For Gods sakes Just freaking get over with it and ban autos in Ballard. That, or add yaks and Rickshaws. And why not?????????????? Why is it so many now can’t walk to the nearest crosswalk or signal?? Lazy and smug spoiled millennials, that why.

That is a crosswalk. It’s just that nobody stops so I can cross or walk.

The City is adding crosswalk striping at an existing 4 way stop and some traffic striping to better delineate the roadway and you jump the conclusion that the City is trying to ban cars.

The ol’ paintsniffer has been on a real bender lately. All those lead paint chips he ate as a kid are coming home to roost.