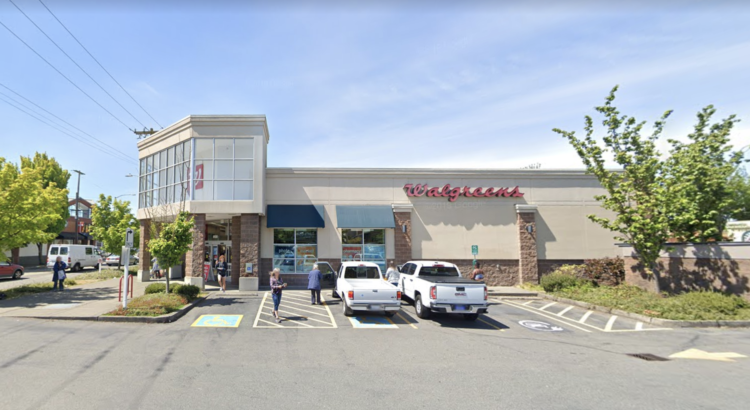 A 43-year-old woman has been arrested for an unprovoked attack of a woman at the Walgreens on 15th Ave NW and NW 85th St on Sunday.

According to Seattle Police, the suspect approached the woman at about 11:30am and swung a black bag containing a half-pound rock at the woman, hitting her head.

The suspect then used a boxcutter to slash the tires of a motorcycle that was in the store’s parking lot.

When officers arrived on the scene, they ordered her to drop the boxcutter or be Tasered, to which she complied.

The female victim was treated at the scene by medics and then was taken to the hospital by a private ambulance.

Officers booked the suspect into King County Jail for assault.

She sounds lovely! I wonder if she’s one of our victimized community members we hear so much about. You know, the ones who are more likely to have violent acts perpetrated upon them than to perpetrate said violent acts? I guess she was just doing a pre-emptive strike!
I hope the woman who was attacked is ok.

An assault happened and you just can’t help yourself but spew worthless drivel on a neighborhood blog.

How is my drivel any more worthless than yours? Because I’m not an apologizer of bad behavior? Sort yourself out, ‘Truth’.

I’m with Truth on this one. A mentally ill person attacked someone, and BBB takes the opportunity to troll. Seek help, immediately.

At what point are hard working, tax paying homeowners going to be called “marginalized and vulnerable community members”?

Seriously? If you are a homeowner and can afford to pay taxes you are not “marginalized”.

Well, we get our sh*t stolen, business and homes broken into and folks are regularly assaulted by junkies and the City Council blames us for their predicament. I’d say we’re a marginalized and vulnerable community members.

So anytime a crime happens, you feel like a “marginalized and vulnerable community member”? That’s a fragile state to walk around.

I would have knocked that crazy bitch to the ground!

oh noes, the poor attacker just needs a hug, a free condo and a 5 gallon bucket of drugs.

Who is actually suggesting this? Seek help, immediately.

She must have been released by now. Pete Holmes is probably taking her out to dinner.

It would appear we are divided into two camps on this which serves no purpose at all. Who ever this person is it is obvious that jail time will have little or no effect as they have nothing to lose, unlike those of us with jobs, families etc. So it is up to us as a community to see that we elect the people with a true dedication to improving the entire community not just advancing some personal political agenda. We must ensure that said individuals are equipped with not only the education but also the experience and leadership skills to pull us all together. Our society is suffering a deep spiritual void that has resulted in a loss of community, personal commitment to civility and willingness to adhere to some form of social norms. Finger pointing, name calling, the blame game and succumbing to a victim mentality only makes things worse.