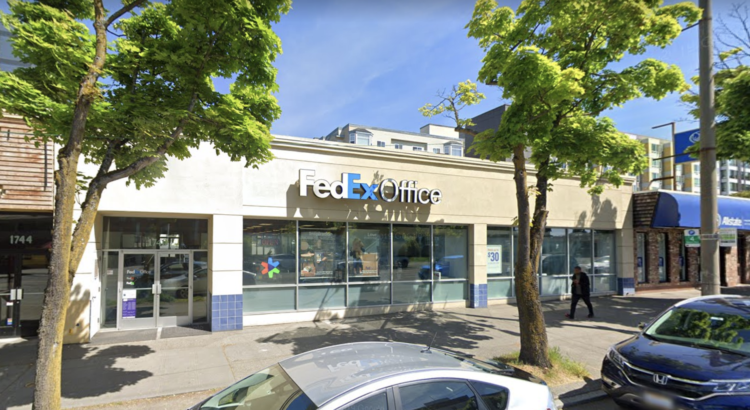 There is an upcoming public meeting to discuss plans for two new 8-story apartment buildings in Ballard’s core.

The two apartments, known as the Ballard Hubs, would be back-to-back on the same block, separated by an alley.

One of the apartments is being planned for 1740 NW Market St, with plans for 76 units, retail and office space, and parking for just two vehicles. The apartment would replace the FedEx building.

The apartment being planned for 1741 NW 56th St would replace the FedEx parking lot and include 84 units with retail and office space. Parking for 33 vehicles is proposed.

The designers are Bumgardner Architects, who also made the Ballard On the Park apartments, Janus apartments in Greenwood/Phinney, and quirky Epi apartments in Fremont.

Both meetings will be held on Sept. 23 at the Ballard Community Center (6020 28th Ave NW) in the Sunset/Captain Ballard Room at 6:30pm.

Oof. I’m not particularly a fan of Bumgardner’s designs, especially “Epi” as linked above.
The massing shown in the preferred design above has no setbacks, and is a solid weirdly ribbing mass. I can’t think of any neighboring buildings with a similar character. Hopefully the design review board can provide some good steering direction.

Even Ballard On the Park? Seems like a pretty classic design to me.

Ballard on the Park is definitely better! I don’t have too many complaints there. It was one of the earlier multi-family developments too. I would categorize Ballard on the Park as relatively bland, with the exception being the trellis in front of the QFC. There isn’t much articulation of the massing, and the color scheme is primarily tan. The material palette is the same from the bottom floor to the top floor which accentuates the bulk of a large structure. In my opinion Valdok I and the upcoming Ballard Yards do a better job of having a variety of materials and massing to break up the bulk. All that being said the proposed scheme shown above does provide “corner” rooms for all street facing residents and isn’t a flat blank facade, so those are both good things. It seems like from a pedestrian perspective it could seem big and tall and perhaps imposing since it’s the same shape all the way up. Maybe it’s skinned with brick at the base and a patterned texture above to break it up, then it could look nice! The ribs will still be an odd feature so that would be challenge. I’m no architect… Read more »

Looks like an upgraded ” Chicken Coop ” ! Don’t use mulch around the grass areas use corn instead !

Becoming just another large American city, where the sun is a faint memory, seems to be the plan here. The re-making of Ballard just continues onward. I get so tired of millennials asking me what “I don’t really like about change” when I lived through Jimmy Carter.

Becoming just another large American city, where the sun is a faint memory, seems to be the plan here.

There’s plenty of sunlight, you just need to leave your parent’s basement.

I get so tired of millennials asking me what “I don’t really like about change” when I lived through Jimmy Carter.

Why don’t you ask him?

Because he’s not the one who doesn’t know where to put the apostrophe.

Ironic that you used a sentence starting with “because” to call me out on my grammatical error.

Wasn’t writing a sentence. Was answering your question. Nice deflection, there, Truthie.