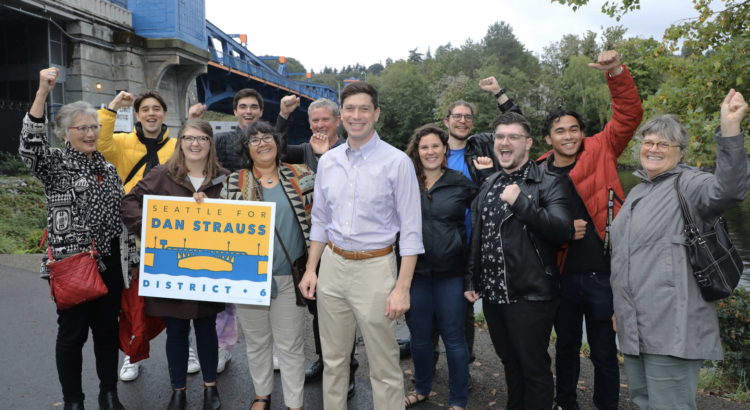 “I am honored to have the opportunity to represent our community,” Strauss wrote in an announcement on social media on Friday. “The people of Ballard, Phinney Ridge, Green Lake, Greenwood, and Fremont make these communities unique and have shaped me into the person I am today.”

Strauss has spent much of his life in Ballard — he grew up in the neighborhood and attended Whitman Middle School. He studied political science at Whittier College in California, and later earned a Master of Public Administration degree and Certificate of Nonprofit Management from the University of Oregon.

After earning his Masters, he returned to Seattle and began working as a legislative assistant to Senator David Frockt. He’s been active in gun control legislation, and worked with the Alliance for Gun Responsibility to pass the Extreme Risk Protection Order in 2016. He currently works as Seattle City Councilmember Sally Bagshaw’s senior policy advisor on transportation, planning, land use, zoning, economic development, and utility policy.

“Our campaign has been about creating a sustainable, equitable, and affordable city that works for everyone, whether you’ve been here one year or forty,” Strauss wrote in his announcement. “This will be my priority as a Councilmember; creating bold solutions at the scale of the problems we are seeking to address.”

Do us all a favor and delete your account.

Spot on and brilliant! Sad thing is, nothing much will change. Government’s job is NOT picking winners and losers. It can’t end humidity or much else. It produces little to nothing, except dependence. Sadder yet are all these highly educated folks here that missed history classes that feel fairness and equity are a government project. Meanwhile Shawammalonna Ding Dong is scheming and rubbing her hands together………………….

hey, you are stealing my material! his mouth is MY joke!

Looks as if the sensitivity seminars are working. You didn’t mention skin color, yet. Just keep watching MSLSD to receive marching orders.

Bring on the hordes of junkies! Dan Strauss hereby declares the gates of Ballard are open!

The ballot counting machine is still warm and the O’Brien whiners have already transitioned to Strauss whiners.

Strauss certainly wasn’t my preferred candidate, and I disagree with him on key parts of his platform, but he gets to start with a clean slate. I’m interested to see how he pushes to complete the Missing Link down Leary.

I sure hope Dan does the right thing.

On his web page, he is very clear that he “supports the Navigation team,” though when questioned in one of the public forums he was more iffy. That’s disingenuous at best. During the debates, he said he would support more police. He was pretty pro-police, actually, but I believe that was only after Heidi’s prompting.

We will see. We are watching you, Dan, Please keep to your word.

I live in South Ballard and have seen it get worse, then much worse, then a little better. We need to stay the course with the work that has been done so far, I just wish I could say I’m encouraged by what he said in the debates.