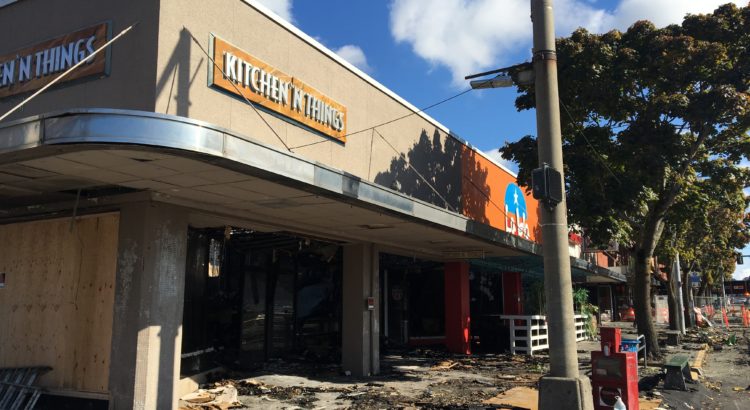 The building that once housed a group of businesses near the corner of 24th Ave NW on NW Market St will be torn down in the coming weeks.

According to Moon Callison from the Seattle Department of Construction and Inspections, they have granted a demolition permit for the damaged building. They expect the building to be completely removed by Dec. 1, after which the sidewalk will be returned to normal right-of-way for public use.

Classic Consignment, which is directly to the north of the burned building, has been closed since the Oct. 7 fire. They’re in the process of relocating — we’ll update when we find out their new location.

Paula Lukoff from Classic Consignment told the My Ballard Group that she was informed that the removal crew will start with a secure wet asbestos removal first, and will bring in heavy equipment for debris removal after.

You can expect an occasional blocked lane along 24th Ave NW between Market up to QFC during the demolition.

No word yet on the future of the corner of 24th and Market — we’ll find out more and update soon when details become available.

I think they should leave it as is. Seems to blend in well.

Any word on the burned-out businesses?
I miss Kitchens N Things!

Me too, and I miss La Isla as well.

Would not be surprised if this gets turned into a 400 unit luxury apartment with 20 parking spaces. Im sure a developer is the one who started the fire.

Really? So you feel they then snuck in, made the electrical problem, caused the fire, then snuck back out? I blame Trump

There is a housing crisis in Seattle. If they could get 400 units out of that space it would be a big benefit to those looking for housing.

I only hope they put a little effort into the architecture and not just build a cardboard box building like all the others.