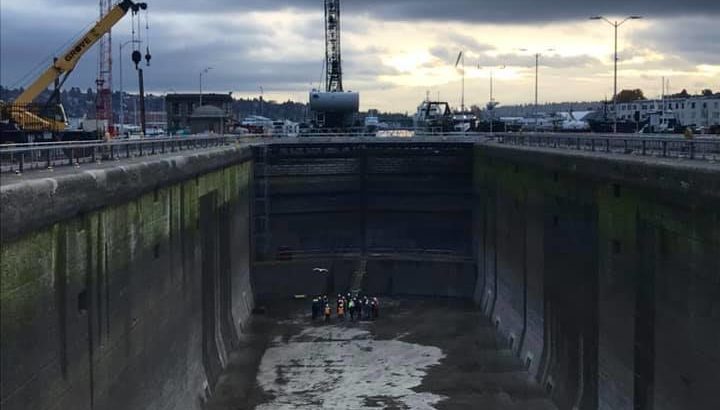 The project to begin replacing the Ballard Lock’s large chamber filling culverts is on schedule to finish up after Thanksgiving.

The large chamber of the Locks closed on Oct. 12 for a scheduled extended closure of 53 days — one month longer than the typical November annual maintenance closure.

The closure has allowed the U.S. Army Corps of Engineers to begin replacing the original 102-year-old Stoney Gate Valves — the same valves that were designed and used during the Panama Canal construction. This is the first of four extended closures, and is part of the $10.5 million, multi-year contract to replace the large lock chamber’s filling culvert gates.

The valves, which are underwater during regular operations, seal off the 8-feet-6-inch wide by 14-feet tall filling culverts.

Bill Dowell from the Army Corps says the installation has been going well, with operational tests and training for maintenance staff planned for this week.

The large lock is still scheduled for a Dec. 3 reopening — we’ll update if that changes.