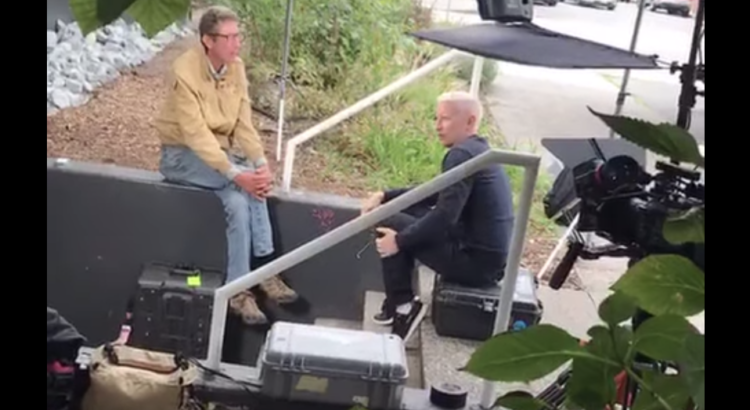 The 60 Minutes report on Seattle homelessness that was filmed in late summer is airing this weekend.

In September, Anderson Cooper was spotted doing an interview with a man in front of St Luke’s Episcopal Church in Ballard. At the time, St. Luke’s Reverend Canon Britt Olson told My Ballard that the man being interviewed was a regular at the church’s free breakfast program.

For the piece, Cooper also interviewed a couple that lives in a tent city with their young son.

The report is set to air on 60 Minutes on Sunday.

Thanks Deb for the tip in the My Ballard Group

Is the boy having health issues or are the parents using this as a excuse to get sympathy ! Did the parents get straight ? Maybe this child needs a foster home until mom and dad get jobs and find housing ! This young child should not be living in a tent !

Maybe there should be a social safety net for families going through transitions. Instead of the state taking away children we should give them homes.

Sounds like a ridiculous solution to a set of very personal problems- going through transitions? Here’s a home!

Mary’s Place would take them in a heart beat. Must be drugs and refusal to follow basic rules in housing.

The child should be removed from the situation. If you cannot care for your child properly, you do not deserve to be a parent.

So if you lose your home can the state take away your children?

Ideally find you all a place to land together but if it’s the streets…then yeah, the kids get taken.

How is that better than giving the family a place to stay? Our society’s priorities are completely backwards.

I think Pants is saying that he agrees with you? Giving them a place to stay would be great. But, absent that — and we’re currently absent that for the most part — saving the kid from street life is the best alternative.

Giving them a place to stay would be great. But, absent that — and we’re currently absent that for the most part — saving the kid from street life is the best alternative.

And because society won’t provide homeless families a place to stay, that’s a reason for the same society to take a child away? That’s psychotic.

There are numerous reasons society isn’t providing families a place to stay…not many are defensible in my opinion. But they are in no way “a reason” to take the child away. The reason to take the child away is to give him or her a fighting chance at a decent life, away from the horrid risks of street life, especially if under the care of parents who cannot even care for themselves.

Odd time to post those questions. Why not wait until you watch the show?

well they just did.

CNN is not news. It’s agenda driven crap. Google their ratings. Fanning the flames with propaganda fixes nothing. Maybe Don Lemon can also come and talk about the black holes jets fly into. At least they got Trump out of office. Oops.

Ha! Old friend Paintking has spent so much time stewing in insane right wing conspiracy theories that he leaps to blame CNN when they’re not even airing the show.

Maybe turn off Fox News and Breitbart for a few minutes and think for yourself, instead of letting Hannity do it for you?

im sure brit olsen will have a well reasoned response to her taxpaying neighbors regarding the impact of attracting a lot of bad folks to the surrounding area.

i’m also sure the finger pointing at high rents and mean ol’ nimbys will be intense (in-tents?) and downplay the vast number of criminals among the homeless.

LIberal Puff Piece. “the Tech Boom” had nothing to do with the mother and father doing drugs.
Without an education Seattle is not where young people want to go to live.
There are some homeless people with an education that maybe if they could kick their drug or alcohol problem they could afford to live here, most don’t.

It will be interesting to see how open CBS is to presenting the spectrum of reasonable opinion vs. the extremes at either end. Extremes tend to make the news because they drive viewership and create for a more sensational newscast (nevermind it isn’t the most informative newscast). Smart and well-meaning people can and do disagree about implementation but it seems like most reasonable people agree that more and better services are needed, accountability by providers and people recieving services is important, and they avoid the “jail them all, run them out of town” mindset. If anything, we should reserve those solutions for the politicians :) I’ll be interested to see how folks react to the broadcast.

The following are not unreasonable:

1. Pay for all housing for everyone who is unhoused
2. Provide meals and substance treatment if needed
3. Provide childcare
4. For those who won’t take housing, they should be able to live unobstructed. Sweeps ruin their lives.

And your predictable troll begins at #4 :)

“Sweeps ruin their lives.” Their lives were ruined BEFORE sweeps came along.

You just make this stuff up to create attention. I bet you were 1 of those babies/children we all had to tiptoe around as you slept. SHHHHH Elenchos is asleep, don’t wake them up. Still demanding all that attention aren’t you darling. Many want you to open your very own shelter, where anything and everything goes, then get back to us. Oh wait, this already goes on every day right in our very faces, yet here you are begging for more. Can’t fix stupid

Yes I slept as a child

Booze and drugs. In every story.