Monster Art, Clothing & Gifts closes on Ballard Ave in preparation for move to Market – My Ballard Skip to main content 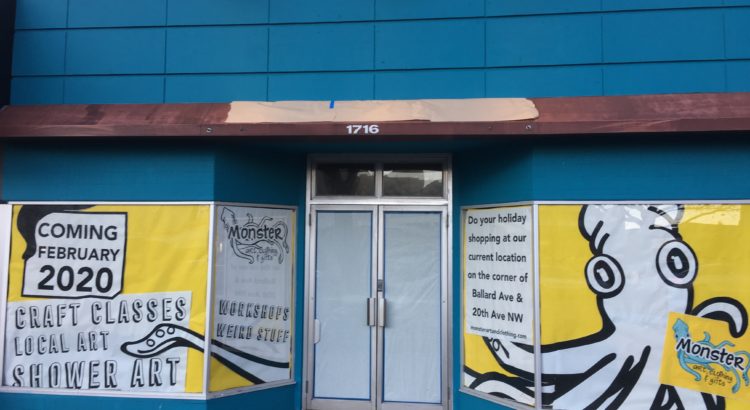 The quirky art and gift store on Ballard Ave has closed their doors, getting ready to move a few blocks away to their new home on NW Market St.

Monster Art, Clothing & Gifts operated on the corner of 20th Ave NW and Ballard Ave for over a decade, but according to owner Rosalie Gale, she wasn’t able to negotiate a favorable lease renewal. So, they’re off to a new spot, moving into the former Tai Chi and Qigong school called Embrace the Moon at 1716 NW Market St.

At three times the size of their current location, the new spot will allow Monster to expand and offer more art classes to the public. They’ve been doing a monthly stitching class for the past year, but with a dedicated classroom in the new location, they’ll start hosting regular craft nights for customers to draw, knit, stitch, or make buttons.

Last weekend was their final blow-out sale, and now they’re packing up their goods for the move.

Gale posted in the My Ballard Group about the sale and impending move, saying she plans to open their doors at the new location at Market St on February 2nd.