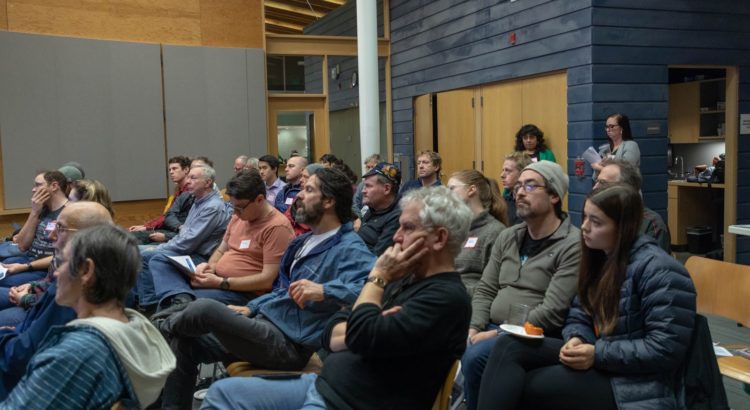 The study, known as the Ballard-Interbay Regional Transportation System, or BIRT, is an upcoming 10-month data analysis that aims to identify community transportation needs and improve mobility for people and freight. This is the first time all major Seattle transit stakeholders have collaborated on an outreach project.

“This isn’t the kind of community engagement that we frequently embark on,” SDOT planner and BIRT organizer Diane Wiater said, acknowledging that the data driven element set it apart from other forum-based planning.

In the midst of plans for major transportation changes in the Ballard-Interbay neighborhood, community members are concerned that project planners will build transit infrastructure without considering local priorities.

The goal of the BIRT study is to ensure officials don’t miss anything when moving from the planning stage to the design stage of the LINK light rail extension (ST3) and Ballard-Magnolia bridge reconstruction, which is expected to drastically change the Ballard landscape.

Wiater says the area has grown by 53 percent in the last year, and transit infrastructure is necessary to accommodate that growth.

“We are in an area of tremendous growth both in terms of economic development and in terms of the number of residents,” BIRT organizer Jennifer Wieland said.

Over the next eight months officials in six local government agencies will analyze transportation data from around the region to establish recommendations for project development. A report will then be delivered to the Washington State Legislature by Nov. 1, putting the project on a tight and fast timeline. Collaborators hope BIRT will ultimately lead to more transportation funding that can be allocated with community needs in mind.

Organizers took questions and comments at the meeting to better understand where they should focus energy when establishing BIRT’s procedures and priorities. Community members focused their comments mainly on the Ballard Bridge and ST3.

Ballard Bridge, a 102-year-old structure, has long faced mechanical problems including routinely getting stuck open during rush hour. Cyclists also note safety is an issue and there is no secure place to cross the Ballard Bridge, despite it being in close proximity to the Burke Gilman trail.

“The Ballard bridge is a death trap, so taking a holistic approach, there’s a great opportunity here. We’re very opportunistic at this stage,” Ballard and Fremont Greenway member Bryant Mason said. “Especially if these organizations include community groups in discussion, so they can get a sense for local knowledge, so we can make this safe and functional for people of all ages and abilities.”

Equity was discussed at length in the context of supporting workers who rely on Ballard’s large port and freight industry. “When we think about equity we need to think about people who drive for a living,” Wiater said.

SDOT and the City of Seattle have also placed equity as a main theme of ST3, which includes racial equity and street and transportation that is fully accessible to people with disabilities.

“Our vision around this is a thriving equitable city that’s connected by transportation,” Seattle Department of Neighborhoods representative Samantha Stark said.

Community members also expressed concerns about the environment. While the City of Seattle and SDOT said environmental and climate impact considerations will be heavily taken into account with regard to planning ST3, organizers of BIRT acknowledged climate will not be at the forefront of BIRT as their resources will be focused on gathering data in a limited amount of time.

BIRT organizers also emphasized that much of the beginning stages of the study will be focused on data and not so much public feedback. However, the forums are necessary to understand priorities at the start and will resume after they’ve finished collecting data.

The Washington State Legislature allocated $700,000 in 2018 for BIRT. Funding was given specifically for the planning process of the Ballard and Magnolia Bridge and not be put towards construction or engineering of the bridges themselves. Design and engineering funding will come from various government sources after BIRT is completed, at which point lawmakers and city officials hope to have a better understanding of where monetary priorities lie.

If you missed this week’s meeting, another forum will be held on Feb. 3, at the Magnolia United Church of Christ.

“If you missed this week’s meeting, another forum will be held on Feb. 3, at the Magnolia United Church of Christ.”

After you use evidence to carefully argue your argument, write a conclusion for the reader, concisely summarize your findings, and provide a sense of closure. First, briefly reiterate the points in your English paper writing https://liuxuesavior.com/ying-wen-lun-wen-dai-xie/, and then remind readers of the main points you made in the paper. Gradually shift from the topic of the thesis to the significance of your findings, and end the thesis. The purpose of writing a conclusion is very simple. It is to answer “What is the result? This is a question to ensure that the reader has learned something. It is a good idea to write the “Conclusion” before the “Introduction”. First, when the evidence is still fresh in your mind, Conclusion is easier to write. The most important thing is to choose your language as much as possible when writing the conclusion, and then do not emphasize too much when explaining these ideas in your introduction. This will leave a longer lasting for the reader impression.