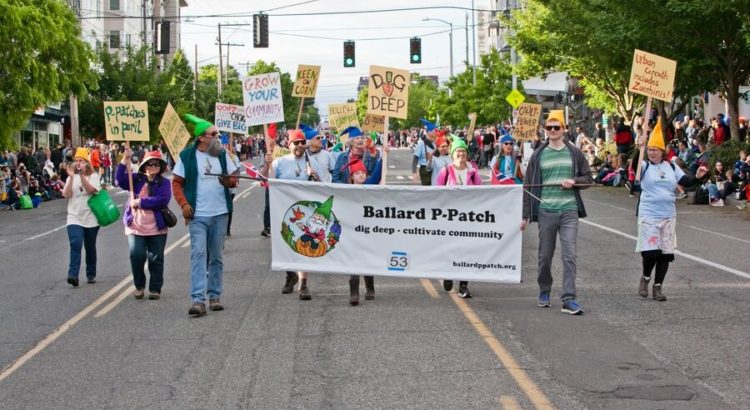 The garden gnomes of Ballard are rejoicing: the Ballard P-Patch appears to be here to stay.

The P-Patch and Our Redeemers Lutheran Church approved a purchase and sale agreement for the half-acre garden located on church property (8527 25th Ave NW), which will protect it from being sold to developers.

The P-Patch plans to secure a loan for the $1.95 million price tag, with two years to pay it off. This means the fundraising will continue, but with a concrete plan and timeframe, the volunteers are confident they can save the plot from being transformed into housing.

“The ultimate aim would be to convert the property to a conservation easement, securing it as garden space in perpetuity,” P-Patch volunteer Roxanne Kenison tells My Ballard.

The garden, established over 40 years ago, has been leased to the City of Seattle by Our Redeemers for just $1 per year. But now, the church needs money for seismic upgrades, and selling the plot is the only viable option.

When P-Patch leaders learned their garden was at risk, they began fundraising in earnest. Since it launched last spring, the Save Ballard P-Patch campaign has raised over $100,000.

The funding for the purchase is coming from a variety of sources, both public and private. Roughly half is expected to come from a King County Futures Tax grant, funding which is earmarked for the purchase of open lands, typically in rural areas.

“The P-Patch property presents a rare opportunity for purchase of open space within an urban area of Seattle that is slated for high-density, urban village development,” the P-Patch leaders said in a press release about the purchase.

The CFT award is contingent on matching funds from other sources; the P-Patch will submit their application for the CFT funding in March. If it’s approved in July, the sale will move forward, and the deed will likely be held by GROW Northwest, which owns a number of other community gardens around the city.

“Julie Bryan was near tears as she announced that garden spaces for the 2020 growing season would be renewed at Ballard P-Patch after all,” the P-Patch leaders said.

This misses the point. I don’t believe P-Patching is entirely about urban farming, per se, but more about the general benefits of green space preservation within centers of density. Sure, these folks may tout urban farming principles, but that may be misguided (bless their hearts) – agreed that we’re not going to feed greater Seattle with P-Patches. Bottom line: it just looks nice. Can’t we still have that?! Space for flowers and green things and sunlight? If it takes giving some ownership grow a few vegetables to drum up the support leave patches of this city box-free, I’ll take it.

I’d say no when there are as many people without homes. Your basically saying (a few) housed folks having something pretty is more important than providing shelter.

Get everyone sheltered, then figure out how to decorate.

So with your “logic” many are then poor due to Bezos being rich. Brilliant critical thinking! With smarts like this I’d run for the city council, as Sawant has NOTHING on you. “Get everyone sheltered”. OK, start by bringing them into your home, setting up tents in your front yard and most of all sending in all of YOUR paychecks. Presuming there are some?

I realize that elenchos2 Is a troll, but even a blind squirrel can find a nut every now and then… I tend to agree. There’s a higher use for this land and it’s not a bunch of white people growing zucchini.

Technically there could be a “higher use” for land that is currently city parks and public waterways, should we give that land to developers too? Having some land for ALL members of the community to enjoy is a good thing.

Yeah a tiny little garden that people get grandfathered into is for “ALL” of Ballard.

It would be a better system if they kicked everyone out and let new people in every year.

Just the old whites in Ballard are going to just hold onto it till they die with no room to expand. Good metaphor for current Ballard.

Yes, p-patches are for all members of the community, even racist trolls like yourself!

Again, yes they are for all members of the community, simply put your name on the list. What part of that don’t you understand? If you have actual proof that they only allow old white people, by all means post actual facts.

“Everyone is welcome to put their name on a list, but the same people will get to use it each year”

That is not actual proof. Again, if you have “actual” proof that they only allow old white people, by all means post said facts, because right now you just sounds like a racist troll without any proof of your claim.

Classic Seattle, call the person that thinks of anyone but white people as racist. Go back to your Safe Seattle blog.

I mean you basically just described yourself.

So you are pro-charter school since they are open to all members of the community?

I’m anti racist, and anti troll. You made ignorant racist statements that you incapable of backing up with facts, therefore you are a racist. Until you can prove your racist statement, I have nothing left to say to you.

“I’m anti racist” clever way to say you are a white person that wants keep their privilege without explicitly saying anything racist. I’ll just make sure there are no places for people of other races to live.

Smoke this pal. Then please turn off whatever it is you’re watching and put down your reading materials, as you’re logic isn’t cute either. Trying to make any sense of this BS or attempting to talk to individuals such as you is feckless. Should us white folks then just be simply erased from history? My grandma came from Norway. Should I feel guilty today? Like there aren’t enough buildings and construction going on all around us. Now it’s a freaking P-patch getting panties all bunched up, using IT as yet another excuse to tell us what a race baiter you are. Perhaps if blacks stopped voting Dummycrat that would help?

The junkies will be glad they won’t lose a prime spot to dispose of their used needles and other paraphernalia.

Good for you. Your hard work paid off, in Seattle of all places.