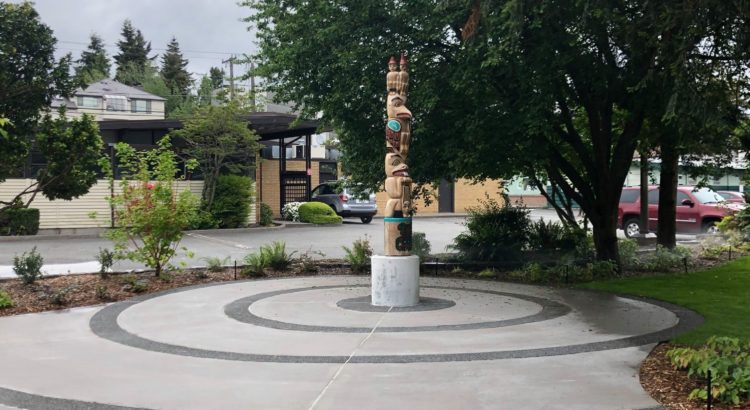 After many years in the making, Baker Park’s quarter-acre addition is now open.

Seattle Parks and Recreation purchased the .23-acre site just south of Baker Park (8341 14th Ave NW) back in 2013 in order to provide more open space for the neighborhood. The addition has a new play structure, swings, an open lawn, picnic area with a barbecue, fitness equipment, and a totem pole.

“Through the public process, the community stressed the importance of retaining some of the features from the original design, which included native plantings and replacing the totem that had been removed years earlier because of safety concerns,” Seattle Parks’ spokesperson Karen O’Connor said in release about the reopening.

In order to commission a totem carver, the community applied and was accepted for Neighborhood Matching Funds. Haida carver Fred Lauth created the new totem pole, which features three watchmen at the top, “seen as symbolic eyes on Baker Park, playing a role similar to that of watchmen on other Haida poles.”

The metal shop in the parks department worked with Lauth to make a custom base for the mounting the totem.

The play area and fitness equipment will remain closed during the stay-home order, and a community celebration with Haida traditions will be planned when the community can safely gather.

Hurry and visit before the tents get there.

The beaver is on the bottom! Why’d they get a Haida carver instead of a coastal Salish? That’s like putting up a a piece of Inca art, wrong region.

The locals never carved Totem Poles. They first came to Seattle when they were stolen from the Haida. I think a Tee Pee pitched there would be more appropriate than a tent.