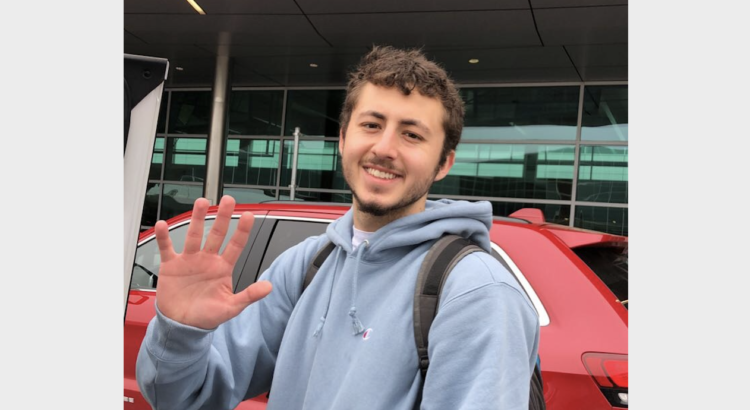 A 20-year-old man who works at the Ballard QFC was physically assaulted on his way to work on Saturday.

Moses Brudnyy was walking past the Ballard Market at 6:40am on August 1st when a man approached him, asking what he thought about Black Lives Matter. His mother, Oksana Peters, tells My Ballard that Brudnyy said he supports Black Lives Matter, and then the man attacked Brudnyy, hitting his face and head until two bystanders intervened to try to stop the attack. Brudnyy and both bystanders sustained severe injuries; all were hospitalized following the incident. The suspect reportedly broke both his wrists during the attack.

Peters says her son was in the hospital all weekend with a severe concussion, a broken nose, swelling, and bleeding. Peters, who lives in Dallas, flew to Seattle to care for Brudnyy, who is back at home healing.

“When I first saw him, his head was the size of a balloon and he could hardly open his eyes,” Peters says, adding that he’s still dipping in and out of consciousness as he recovers.

Brudnyy will be unable to work for some time, so his QFC supervisor Katrina Surdyk set up a GoFundMe to help him during his recovery. Since it launched Tuesday morning, it’s raised $4,299 from 129 backers.

“Moses is one of my checkers. He’s one of my good ones,” Surdyk writes. “A sweet nature, kind heart, laid back, and hardworking kid.

“…No matter how he is treated by some of our more colorful customers, he’s polite, and patient.”

Surdyk says that they’re covering his shifts until he can come back to work, and she’s hoping the fundraiser will help him with his medical bills and loss of income.

Brudnyy’s mother says she’s been frustrated with the lack of information from Seattle Police, but was told by her lawyer that the suspect is in custody and that his case will be heard in the King County Courthouse.

My Ballard has contacted SPD and hasn’t yet received a response; we’ll update when they return our request for information.

Peters says her son is glad to hear that his attacker is in custody, but he’s feeling “very traumatized” she says.

“I want to make sure our voice is heard,” Peters says. “Even in a nice place like Ballard, people can be attacked.”

I hope they also reach out to the office of Council Member Dan Strauss so he can double down on his public safety efforts.

yes, by immediately rousting and removing the bums from commons park. 100% this jackass was homeless. care to wager?

I’ll bet Truth’s testicles. Although if you win, you’ll have to ask his wife for them.

Oh I imagine your testicles every time I visit MyBallard; floating in that glass jar your wife carries around in her man-purse.

According to the fundraiser message on Go Fund Me, the attacker was homeless.

You are not funny, a complete creep and have some serious mental health issues.

The poster of the Go Fund Me now says they believe the individual was not homeless.

Except a BLM supporting innocent member of the community was viciously attacked, by, you guessed it…NOT a BLM member. Genius.

yes. i believe the liberal media. Trump attacked him. Where is GRETA when we need her

Rather than being divisive, how about donating on his GoFundMe page?

why? give me ONE solid reason based on reality.

I send my prayers for Moses and family and Associates. I pray for a speedy recovery. Just awful!

so nothing at all about the attackers? who, why?

i will bet it was a deranged a-hole from the commons. who else would break both wrists attacking someone?
i will also bet this info will not be forthcoming, you know, since you have to pretend these guys are unlucky nice guys.

…and the more i’m seeing online, this was one of the scumbags from commons. nice. all they need is a hug and about 3 gallons of meth and they’ll be gainfully employed in no time.

I’m betting on someone from the campground of 17 tents four blocks away on 53rd.

any word from strauss? this happened on saturday, today is tuesday, haven’t heard a peep in any local news outlet.

someone please explain how society, the community, the greater good is served by condoning violent drug addled tent dwellers? i’m all ears…

If the person was caught going to have to wait to hear from Seattle City Attorney Pete Holmes or the King County Prosecutor. I think Dan Strauss is as concerned about it as the rest of us.

riiiight. so concerned that the vagrants get to take over the park, without masks, then spread their wonderfulness throughout the neighborhood….if only someone would offer them a job – they’d run away screaming!

Dan Strauss is concerned about one thing only: Dan Strauss.

Suggestion- How about if we DON’T defund the police? https://stopdefunding.com/

Your shtick is not funny and you just sound like a complete tool.

I live near where this happened. Before the incident, every morning around 5:30am you could hear a man yelling out. An obviously mentally disturbed man. Would happen almost every morning. Was that the man who attacked the cashier? If we call the police about a man who yells all the time, would do they do anything about it? I’m losing confidence that things can change.

Emmy — I’ll try to boil a complex issue down to a few key points in response. First and most important, the involuntary commitment laws are very strict and specific to the point that people in obvious distress still do not make the cut. So, police really don’t have anything in their arsenal to do anything. Even if they did, jailing a mentally ill person won’t do much to help that person. All of this adds up to likely no police response, or a very delayed response, if you were to call.

Now, some folks who are calling for defunding the police say that a portion of SPD funds could be moved to supporting a mental health response team that could go to these situations and…I don’t know. Talk to them, i guess, because their ability to involuntarily commit is no better than SPD’s. Personally, I’m for a well-funded and trained, NON-RACIST police force…AND…better social services so that cops don’t have to respond to any/everything as they largely do today. Hope this makes some sense.

The alternative is I shoot the guy in self defense…

You do some research, the RCW says you can use deadly force to stop a felony from occurring or when one is in eminent danger of occurring, either on yourself or someone else in your presence. The standard is “great personal injury, ” which unfortunately this young man and two Good Samaritan bystanders were victims of. RCW 9A.16.050.

I stand corrected. I am sorry you were not able to shoot the guy in that case.

Yes, you’re right. What I’d like to see is a social worker as part of the response (along with training fora non-racist police force).

Well you already have a non-racist Police force. What you don’t have is a mayor or DA that favors enforcing laws. You can change that with your vote.

Just about EVERY police force in the USA is “non racist”. Blacks commit vastly disproportionate amounts of crime, especially violent crime, and this leads to them having more contact with cops. Nobody is to blame for Black criminality and violence (and the ensuing deaths by cop) except Blacks themselves.

vote Republican. they are less likely to allow criminality. you have nothing to lose. Libs have been in control for 50+ years. you will know i may be right by all the negative feedback from Seattle Liberals. PS Amazon sells pepper spray, it is legal.

I’m all for waiting to find out who injured this poor person. However, if it does turn out to be one of our ‘valuable’ homeless community members, when are we going to say enough is enough? Enough of our parks being occupied by bums? Enough of them being treated as a protected class, free from prosecution and free to assault, rob, and be addicts at will? If it does turn out to have been an attack by a homeless person, can we then clear them out of the commons forever?

Whaaaat?
Between St. Luke’s, Urban Rest stop, multiple low income housing and access to shoplifting, there is no way you can clear us out. We’re here for as long as possible. Not even Hepatitis A can get rid of us. And no one bothers us. In what other city would I be able to cook meth and sell stolen bikes in?

you CAN get pepper spray from Amazon and stand up for YOUR self should a wacko confront you. it IS legal.

Anyone know how Moses is doing today?

Can we assume since he’s a BLM supporter he didn’t ask for help from the Seattle Police and instead took it on the chin like a truly righteous dude?

I am sure the good people who support BLM will be leaders in helping this fellow with his med bills.
Filling in for is inability to work with dollars. There are a lot of those here, sound off people, say it LOUD BLM!
By sending $$ to his GoFundme acct.

Once again proving exactly why Black Lives DO NOT MATTER. These feral scum need to be hung from lamp-posts.