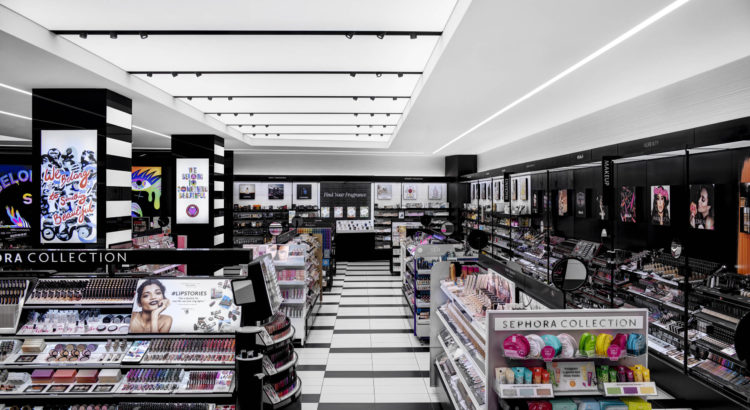 The time is nearly here for the new Sephora store to open up in the Ballard neighborhood corner retail space at the Ballard Blocks 2 (14th Ave NW and NW 46th St).

The cosmetics retailer has slowly been moving into their new space in recent weeks, with their newly minted sign highlighting their arrival to Ballard. The store will host a soft opening on April 19th, with their grand opening celebration to the public on Friday, April 23rd.

This is the fourth Sephora store to open in Seattle along with the downtown Seattle, Westlake, and U-Village locations. This year has marked the largest store expansion in Sephora’s 21-year history: The cosmetic retailer has opened 60 new freestanding locations and 200 locations opening inside Kohl’s stores later this year.

“Following a year in which e-commerce dominated the retail landscape, this move signals Sephora’s confidence in the future of the brick-and-mortar shopping experience and continued creation of welcoming spaces for all,” Sephora wrote in a press release about their expansion. “With a focus on growing its presence in off-mall locations, the retailer also aims to make Sephora more accessible to beauty shoppers across the country.”

They’ve also recently announced their “Buy Online, Pick Up In Store” service, which will enable clients to reserve products in their local Sephora stores for up to 48 hours. The service only applies to their freestanding locations, which includes the Ballard store.

Sephora is the latest retailer to move into the LEED-certified new Ballard Blocks 2 complex, across the street from Ballard Blocks 1, home to Trader Joe’s and Ross Dress for Less. Ballard Blocks 2’s major retailers include PCC and West Marine.

There are still vacant retail units in the Ballard Blocks 2; the two spaces to the west of Sephora on NW 46th Street remain empty. The Ballard Blocks 2 site plan still shows 85C Bakery as the leaseholder a few doors down from Sephora, but they’ve been quiet on opening plans.

Sephora is pulling out all the stops for their Ballard arrival: For their opening weekend, the cosmetics store will be giving away scratch cards with each purchase with prizes including Sephora gift cards for up to $100 and sample sets. Sephora members will get a limited-edition branded tote bag for purchases over $100.

The store will be open from 11am to 7pm, Monday through Saturday, and 11 m to 6pm on Sundays.

Check out Sephora’s Facebook page for more details on the giveaways and about their grand opening day here.