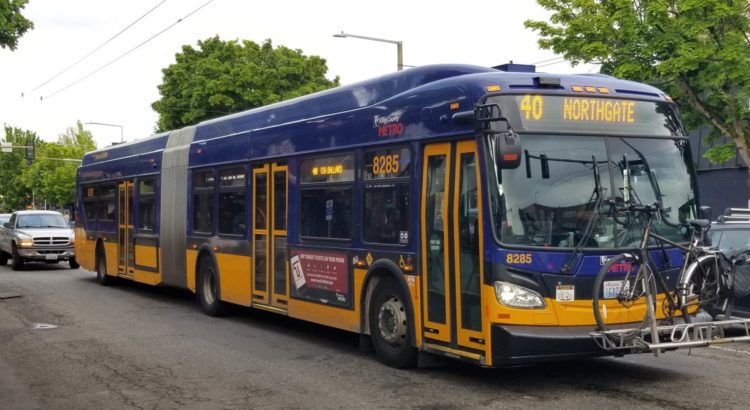 Changes are in the works for Route 40, and the public has until Friday to comment on proposed improvements.

King County Metro and the Seattle Department of Transportation (SDOT) have been working on the Route 40 Transit-Plus Multimodal Corridor Project to make bus trips faster, reliable, and safer for the community with proposals for four areas of focus including Ballard.

Route 40 is one of the most used routes in the King County Metro system with around 3,800 riders each day.

For the past year, Metro and SDOT have collected feedback via online surveys and virtual open houses for residents and transportation advisory boards. The latest opportunity to participate is via an online survey open through April 16.

View the proposed changes along the Route 40 corridor in the below pre-recorded presentation.

The improvements the team has identified focus on four areas that struggle with transit time and reliability issues. The locations are Westlake, Fremont, Ballard, and North Seattle.

In Ballard, improvements for the corridor include new pavement on roadways, driveway enhancements, new signals, new utility and drainage infrastructure, and pedestrian infrastructure.

Along Leary between 20th and 15th, SDOT is proposing to reduce the total number of travel lanes from four to three, adding in a two-way center turn lane and wider travel and parking lanes.

In the heart of Ballard at Leary and Market, SDOT wants to build a northbound bus lane and a two-way center turn lane.

A proposal from the project for the Westlake area includes installing a southbound bike lane approaching Nickerson St. with a protected bike box leading to Dexter Ave. An accessible new pedestrian signal is proposed on Gayler St. and for reduction of pavement failure, four new concrete bus pads are proposed at southbound bus stops.

At the intersection of 9th Ave N and Fremont Bridge, a proposal of converting curbside lanes into bus-only lanes in both directions has been proposed to improve transit travel times. After bridge openings, northbound buses will be at the beginning of the queue to cross the Fremont Bridge.

Construction for this route is expected to be in 2024. The schedule begins with planning from 2018 to 2021. For complete project proposals go here.