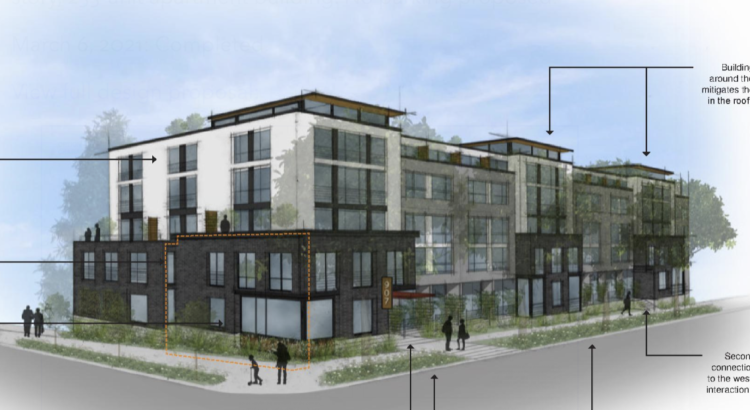 The plans for one of NW Market Street’s new apartment monoliths is taking shape, this one going in at 907 NW Market St.

According to city records, the latest plans are for a 229-unit, 5-story apartment with no parking proposed. The apartment would replace five single-family homes along NW Market St, and would extend for half a block west of the corner of 9th Ave NW.

Early design plans are in the works, with architects Skidmore Janette heading up the design process. The preferred option emerging from the EDG process would include a corner-entry lobby with south-facing courtyards, rooftop terraces, and ground-floor decks along NW Market St.

While there aren’t any vehicle parking spots included in the early plans, there are several bike parking stalls in the design details.

According to the design packet produced by Skidmore Janette and Greenbank Holdings LLC, the architects say the project will “strive to emulate positive elements of other multi-family developments along Market while also establishing new patterns and precedent for future development in this evolving area.”

The designers say they want to bridge the gap between single-family homes on the east end Market Street and the higher density of housing west of 15th Ave NW—this will certainly be a theme as several other apartments are in the works for the stretch between 9th Ave NW and 15th Ave NW.

The new apartment would be built just east of a new Ballard Aegis Senior Living center, and across the street from another large 6-story apartment complex with 150 units and 60 to 90 parking spots in an underground garage.

Down the street, a 7-story apartment building is set to replace the Firestone at 1145 NW Market St. The plans include 122 units with ground-level retail. Parking for 70 vehicles is proposed. Just west of 904 NW Market St is the future site of yet another 5-story apartment complex at the current KFC location. The plans include 86 small efficiency dwelling units with no parking proposed.

All projects are within Ballard’s Urban Village Hub, which allows for taller developments and reduced parking requirements.

Comments on the early designs will be accepted through May 3rd, 2021.