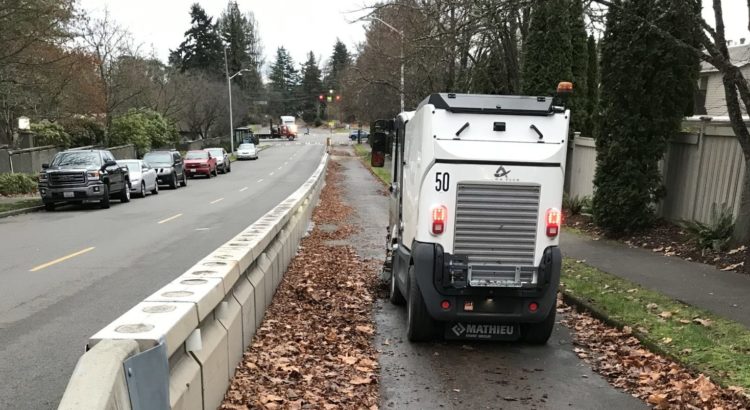 The sweeper was named by an 11-year-old boy named Pascal from Licton Springs. According to the Seattle Department of Transportation, the name gained over 1,500 votes on Twitter, securing the new name for the street sweeper. Ok Broomer came in narrowly ahead of the second-most popular name: Sir Sweeps-a-Lot. The contest was done sweet-sixteen style

The Ok Broomer sweeper is a smaller version of a normal street sweeper and will be used to fit within the city’s protected bike lanes. Its top speed is just 25mph and will be making its way around Seattle’s bike corridors.

Before SDOT got the sweeper, city crews had to clear bike lanes manually without machinery, which was a time-consuming process. The new sweeper will allow SDOT to cover more ground and sweet more efficiently. “It’ll be especially helpful in late fall when the leaves start falling, during spring when cherry blossoms are everywhere, and after windstorms when debris clutters the bike lanes,” SDOT shared on their blog.

In partnership with Seattle Public Utilities, SDOT sweets over 26,000 “broom-miles” of street each year in the city. Broom-miles are the total miles that operators sweep—there are about 40 routes of varying lengths that the city sweeps at different frequencies, according to SDOT.

SDOT sweeps up around 5,000 tons of debris annually, which prevents pollutants like metals, nutrients, tire dust, and plastics from entering local waterways.  SDOT has some recommendations to help keep streets bike lines clean and free or debris:

The Ok Broomer sweeper is the second city machine named by residents in recent months: Back in April, Seattle Public Utilities announced that the new tunnel boring machine in Ballard would be named MudHoney. The tunnel boring machine is being used in the Ship Canal Water Quality project to dig a wastewater storage tunnel to reduce water pollution in Salmon Bay, the Ship Canal, and other waterways.