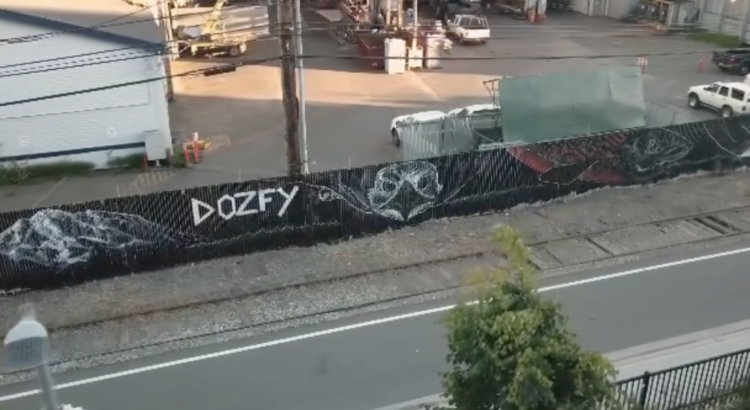 Ballard has just added another public art piece to the neighborhood, with a massive aquatic-themed mural now gracing the fence on NW 54th St in front of Stabbert Maritime, just behind the National Nordic Museum.

The Ballard Alliance partnered with the National Nordic Museum and Stabbert Maritime to commission the mural, created by local artist Dozfy.

Dozfy spent just a few days painting his latest creation, starting on Friday, May 28 and finishing the following Monday morning. Dozfy said he has experience working with different surfaces, but this one was different.

“This is probably the first time we have worked on such a massive piece on a fence, it’s a little bit more tricky in execution, but we have good people like Novo Painting and Ballard Alliance to execute the project,” Dozfy told My Ballard.

“If you walk by it at a slower pace you see the details that capture the eye,” Dozfy said. “A lot of people who work at the Nordic Museum have commented that at the top floor when you see it from afar it’s a beautiful cohesive mural.”

The whole mural is themed around marine animal life, inspired by neighboring Salmon Bay and Stabbert Maritime. The artist says he approached the mural similarly to the Chinese scroll painting and how it unravels. The mural consists of an eagle in the center with mountains in the background and fish covering the middle ground.

Dozfy’s work has appeared all over Ballard, including cafes and restaurants such as Arashi Ramen and Anchored Ship Coffee Bar. Dozfy also helped paint the former Ballard Blossom in murals along with four other local aritsts, part of another Ballard Alliance public art project last year. The building was increasingly becoming hit by graffiti, and the new owners (who have plans to eventually replace it with a new hotel) agreed to the mural project before development starts.

Dozfy’s studio is located in Ballard, where he’s been working as an artist for seven years. Stay tuned for a future project of sculptures to be installed around August later this year.

“A big thanks to Stabbert Maritime, Ballard Alliance, Novo, and Nordic Museum; we all worked together to create a more enriching mural for people taking on the Burke-Gilman Trail,” Dozfy said.

Visit @dozfy and @dozfyworks or at their website dozfy.net to keep up with the artist’s future work and the video of a drone shot created.