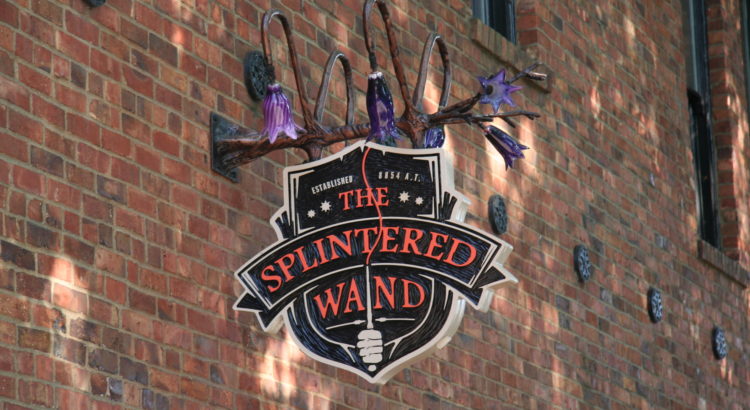 After years of waiting, the public will finally get to experience the wonder that is the wizard-themed pub The Splintered Wand, along with its wand shop and event space.

From the outside, the three-story brick building at 5135 Ballard Ave NW is no different than any of the other buildings in Old Ballard. The building has the same historic look and charm as Macleod’s Scottish Pub across the street, but the inside is truly unlike any other in Ballard.

The interior is decorated with an eclectic array of knick-knacks from all over the world. One such specimen that immediately stands out is a large skeleton hanging from the ceiling. According to the owners, it belonged to the mythical Ballard Sea Monster. This is the first inclination that the new pub is anything but ordinary.

The owners go by Geoffrey Thaddeus Constantine Balch and Andrea Ravnholm when they are within the walls of the building. They will tell guests that they are 300-year-old wizards whose families came over to North America from Europe in the mid-16th century.

As brother and sister-in-law, they found themselves in Ballard in the late 19th century and purchased the building right after it was built in 1896, and have been living undercover ever since.

The first floor is home to The Splintered Wand, a pub that features a bar with a full absinthe selection and interactive cocktails—referred to as potions—concocted by alchemists. Whether they are an apprentice just starting out in alchemy or have reached the level of master, each alchemist (and indeed every staff member at the establishment) has their own story of how they found themselves here on Ballard Ave.

The restaurant portion of The Splintered Wand will offer British-inspired pub food with meat, vegetarian, vegan, and gluten-free options. The potions from the bar can also be made non-alcoholic for guests under 21 dining in the restaurant.

A wand shop by the name of Piscataqua & Balch can be found on the second floor, where custom wood wands are created based on the customer’s astrological chart. The shop’s website further details the history and theory behind the wands.

The third floor, called the Euphorium, is a multipurpose space that will be available to rent for private events and may also be where Andrea teaches a spells and charms class.

They initially planned to come out of hiding and open The Splintered Wand in the fall of 2019, but COVID-19 and other obstacles delayed their plans.

“This is a place [where] you come and live the experience and…we couldn’t do any of that during COVID,” Balch said.

According to Ravnholm, COVID-19 wasn’t the only hindrance to opening. There was also more magic they needed to add before they felt like it would be fully ready for the public.

“For what we’ve invested in it, time and energy, we would’ve delayed it [whether or not there was COVID],” Ravnholm said. “It’s the type of restaurant where first impressions count. We want to open up right so we don’t have to redo things.”

As of now, the owners are hoping to open by the end of July, but they still have some things to work out.

While the owners say they don’t have a target demographic, they acknowledge that it may be more difficult to get some people to fully embrace their magical potential.

Ultimately, Balch and Ravnholm say their goal is to create more meaning in people’s lives and inspire those who come to visit The Splintered Wand to think outside of the box.

“Magic takes a little bit of stopping and thinking about things,” Ravnholm said.