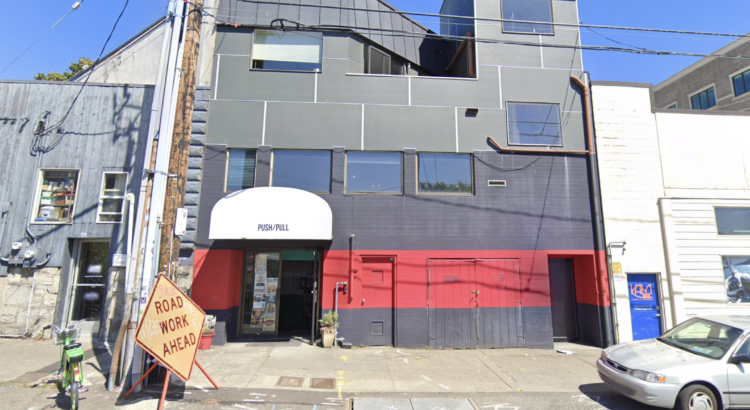 The art and comic store Push/Pull is moving above ground, into the former location of the Dakota Art Store.

Push/Pull art cooperative has been operating out of the Hotel Albatross basement on Shilshole Ave. since 2015, when it moved from the Greenwood Art Collective. Push/Pull director Maxx Follis-Goodkind tells My Ballard that in addition to occupying a larger space than Push/Pull’s current location, the store will be adding art supplies, “retaining the selection of professional quality materials found at Dakota Art, as well as introducing new and hard-to-find brands.”

Dakota Art Store closed in July after 9 years on the corner of 20th Ave NW and NW Market St. Dakota had been in Seattle since 1990; before Ballard, it was located on Roosevelt in the U-District. Now, Dakota’s remaining locations are in Mt. Vernon and Bellingham.

Push/Pull, for folks who haven’t yet had the pleasure, is a haven for local artists. The art cooperative promotes underground art and comics while actively seeking out marginalized and under-represented artists, the website states.

Follis-Goodkind says that the expanded gallery space will allow for more classes and events put on by the cooperative. Push/Pull has been offering online programming since the pandemic started, but plans to return to in-person classes with the new larger space.

Push/Pull has a strong presence in the Ballard and Seattle art scenes, Follis-Goodkind tells My Ballard. Along with featuring local artists in her Ballard shop, Push/Pull also produces events including the Exterminator City comic show series (now in a virtual format) and the monthly Ballard Night Out art walk. Their classes span a wide variety, from teen art jams to community figure drawing to boot camps for the professional-level Procreate app, Follis-Goodkind says.

Follis-Goodkind expects to open the new location at 2000 NW Market St on September 7. She’ll be hosting a closing party at their Shilshole Ave location during the next Ballard Night Out on August 19, from 6 p.m. to 9 p.m. She says visitors will receive a mystery bag instead of refreshments—mainly to encourage folks to keep their masks on.