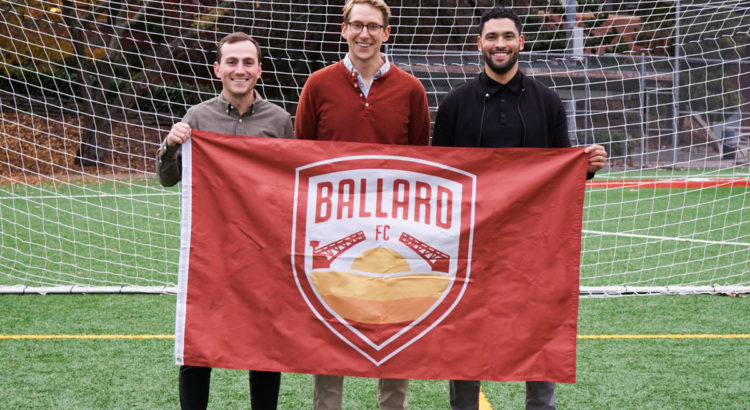 Ballard FC today announced the formation of the region’s first neighborhood-based semi-professional soccer team, set to start competing in summer 2022 in the USL League Two. Home games will be held in the Interbay Stadium.

“We are incredibly excited and honored to be getting Ballard FC off the ground today. We love this community so much and Ballard FC is a way for us all to celebrate that!” Zisette tells My Ballard. “We are truly a club by the community and for the community and we are so excited for what is ahead.”

Ballard FC will host eight home games throughout the summer-long league. They say they will “provide fans with a community-oriented gameday experience” which includes activities for kids, local food vendors, craft beers, “Ballard-centric theme nights”, and fundraising for local organizations.

“Bringing a high-caliber soccer team to the greater Ballard area has been a dream for a long time. What will distinguish Ballard FC is our integration and commitment to the community,” Zisette said in a statement. “Everything we do will be intimate and hyper-local: from the game-day activations to the players, sponsors and community partners. Ballard is truly a special place with a proud history and culture all its own. There is no community more ready for this!”

The Interbay facility has 1,000 seats, 300 of which they say will be allocated for season tickets (deposits available for $22).

“Prior to going pro, I played with the Des Moines Menace, a USL League Two team out of Iowa,” Neagle said. “So I know first-hand the incredible impact community-centered teams can have on both up-and-coming players, and the community at large. This is an exciting time for soccer fans and players alike.”

Ballard FC will be hosting a launch party on Thursday, December 9 at 6 p.m. at Reuben’s Brews (5010 14th Ave NW), their first season sponsor. They say attendees will get to learn more about the team, connect with the leaders, get info on season tickets, shop their new merchandise, and hear from special guests. The inaugural home jersey will also be revealed at the launch party and will be available for sale.